2020 has very nearly been the year without sewing, not because I didn’t want to sew or didn’t need new clothes, but mostly because of having very little time – and also because we discovered that my studio floor angles down towards the right corner, so I was sitting sideways on a downhill slope, which was causing a lot of  paid, required a complete studio restructure and which has made me a little leery even now of setting up to sew in case it triggers more agonising lower-back spasms.

But the things I did make have seen a lot of use – two Named Clothing Blair Batwing tops, the second mashed up with the Fancy Tiger Crafts Adventure Tank, which has been an excellent combination, especially in the viscose jersey I used for it, 2 masks (what a surprise), a jersey headband when my lockdown hair became overwhelming but I couldn’t yet go to a hairdresser, plus one pair of underwear. 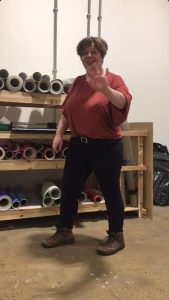 So not a lot of adventure here, not a lot of new skills learned, but I did attempt my first pattern mash-up with the Blair/Adventure top, which was extremely successful, and I also made another adaptation to the Blair pattern, which was to create a cuff to draw in the wrist of the sleeve, allowing it to be pushed up out of the way. So that’s been a step forward and I’m really pleased that I attempted that. I made it to be stagewear for performing Quiet Songs, firstly for the performances at the Locksbrook Campus opening (in the photo here) and secondly with a view to it being for the performance in Lithuania, which of course didn’t take place but might in April. If we can travel then. And assuming that I don’t need to fork out a massive fee to get a licence to transport my instrument.

So what’s the plan for 2021? I’m really not sure – I’m still wary of trying to do too much sewing because sitting down in that room tends to trigger the spasms, which are agonising and take days and days to stop once they start, but I need clothes which are decent for meetings and teaching and performing, and once we can go places I’ll need decent things to wear then too. The weight I’ve gained during lockdown makes it hard to try to make decisions as to what to make, especially when I’m risking extreme pain to make anything – I want it to be something that will last, not something just for now – but I still need clothes for now! So I think I’ll keep it simple and I have a few things on the plan already:

There are loads of other things I’d like to make, but if I can do these, then that’ll be a good start. I’m not so interested in pushing my skills this year as I am in just managing to make some simple clothes that will work either at home or when travelling. I’m not planning on buying any fabric at this point – all the fabrics mentioned here are in my stash already, and there’s loads more that could be used too, but I don’t want to get too ambitious, given the low productivity of 2020 in this respect!

As regards knitting, I’ve started knitting a shawl from leftover Rowan Kidsilk Haze in various shades that’s in my stash. Over the autumn, I felt that sometimes I’d get a bit chilly in videoconferences but either not quite cold enough for a jumper, or didn’t want to be taking jumpers on and off (given proximity to the camera and occasional tendency for one’s other garments to ride up when removing a cosy layer), so I thought it would be useful to have a warm but lightweight shawl that could just live in the studio, ready to grabbed if needed. It’s an easy pattern but somewhat on hold at the time of writing due to one of the needles apparently having fled down the back of the couch… must retrieve and continue!