This is just a tiny update because I realised I completely forgot I was even trying to do #memademay in the chaos of rushing off to Chicago and then heading straight into rehearsals on my return. But while I didn’t complete the challenge I set myself (the dress for the wedding turned out to not really be needed and the unspecified thing just didn’t happen), I did complete the two new elbow-sleeve, v-neck Union Street Tees that I wanted to have done for Chicago.

The first used the gorgeous robot-printed cotton jersey I bought in Australia and the second the sea-green rayon jersey I bought on eBay, so quite different fabrics really – the robots are quite thick and have little stretch, and I felt the resulting top could have done with a little more space in it, but it’s certainly wearable; and the sea-green came up well and I feel the drape works well with this pattern – or at least it does on days when I’m not feeling too porky!

I didn’t quite get the sea-green finished in May – it was on track to take to Chicago but then I discovered that one whole side of it had somehow stretched out and I just didn’t have the time to mess about trying to recut it (and when I did look at it I came to the conclusion that actually recutting wasn’t the answer because the armhole had stretched too, so it clearly wasn’t just miscutting but actual stretching out), but I sorted it out soon after I returned and it’s seen a fair bit of wear, including on stage! 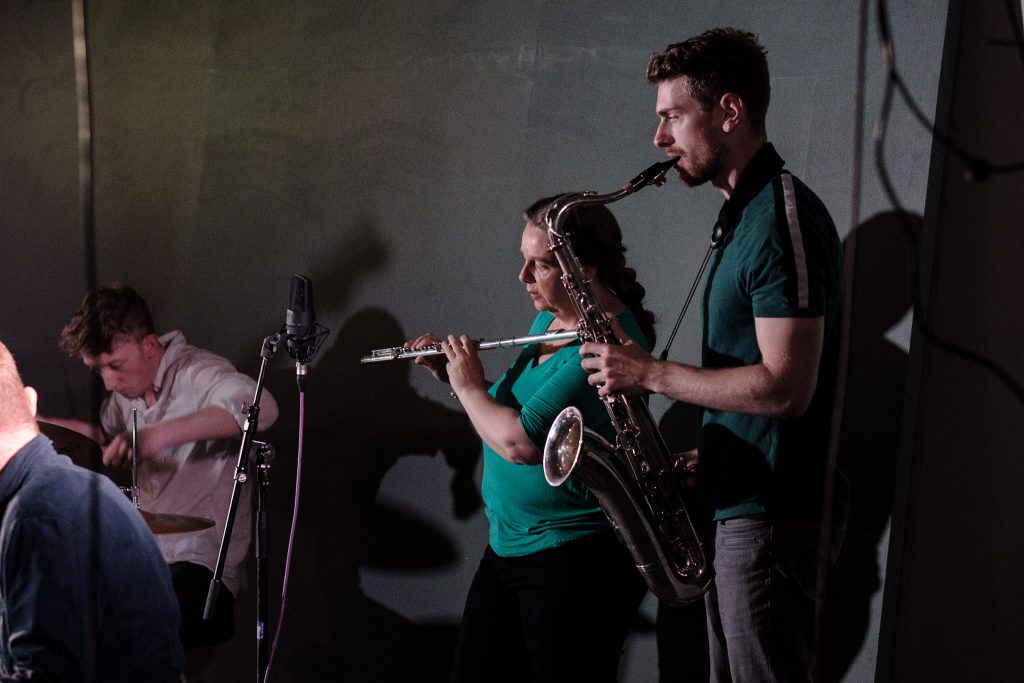 Alas, I don’t yet have a photo of the robots, although I’m sure I’ve worn them for a vlog but I can’t find a shot of them. Will add when I do (if I remember).

I didn’t make any changes to the pattern for these – just whipped them up – but I’m thinking that it might be necessary to use a slightly larger size across the bust/waist/sleeves when using a fabric that doesn’t have much stretch to it – I found this issue with the sparkly top I made for Huddersfield, which was similarly quite heavy lowish-stretch material. While the other versions I’ve made certainly aren’t really needing to stretch too much, I suspect it’s affecting the ease a bit.

I’m getting a bit better at the V-necks, but they’re still an absolute pain to do!

The one thing I got really wrong with these though, was that I had an unlabelled line on the sleeve pattern and wasn’t sure what it meant – but then discovered that it’s the cut-line for elbow sleeves, so the sleeves on both these were too long – the robots I’ve just left slightly long, but the green I tried to shorted (with a big hem but it didn’t quite work, then the hem fell down and hit at exactly the right place, so I’m running with this “decorative feature” of a sewn hem with an unhemmed section underneath. Looks better than it sounds…