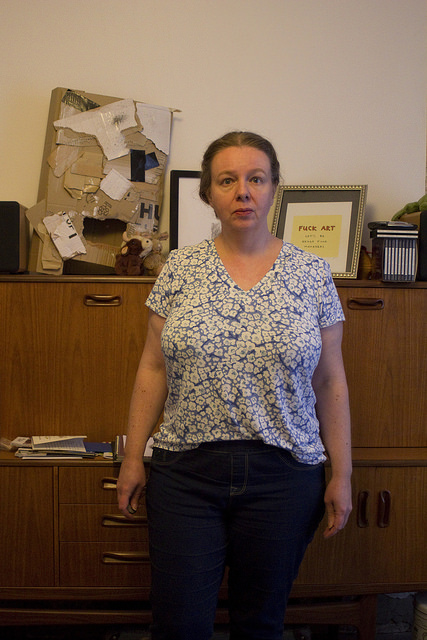 Way back before I realised the fashion industry had it in for me, I bought a dress. And then I spent several years repeatedly trying on said dress, feeling it should look good on me (the fabric was great, and theoretically the shape should have worked for my body type) yet always feeling frumpy. “When I lose weight it’ll look better,” I kept telling myself – but you know what? It never ever did. It didn’t matter what I weighed, how good I felt about myself on any given day, I’d put on that darned dress and feel old and unfashionable. So in the end I gave up and decided I’d turn it into something else. That plan failed, but I kept the pieces to one side, determined to make something of it.

And now I have! 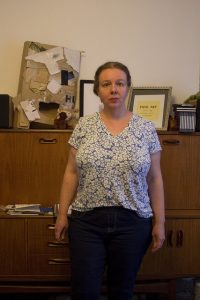 I’ve had the pattern for the Union Street Tee from Hey June for quite some time now (almost a year, I believe!). I made up a first version using some scraps from my Hudson Pants (yes, I’ll get around to photographing and posting those soon), and this dress fabric I earmarked for version 2.

For this version, I took in the shoulders by two whole sizes (raising the whole thing up by about an inch and correcting the dart position in the process) and split the (enormous) dart into two (I did take a photo of the darts, but with the busy print you can’t actually see them). As with version 1 I hand-sewed the V because the 1/4-inch seam allowance is just ridiculous and uncontrollable for such a tiny length of seam. I think the hand-sewing is neater than in the first one, but it’s a little wonky – not in any serious way (yay busy pattern!) but the seam in the neckband’s V doesn’t quite meet the point of the V on the bodice. A tiny thing, but obviously something I need to watch for.

I reused the sleeves straight from the dress. Partly this was because there wasn’t enough fabric to cut new sleeves (see that blog post I linked to above) and partly to see what would happen. The dress’s sleeves were a little wider than the sleeve pattern provided but with them being so short, I figured I’d prefer a looser fit on my… erm… generous upper arms which don’t need any accentuating, thank you very much. Instead, I decided to pleat the excess at the top of the sleeve, and I’m rather liking this little detail – it sits quite flat, but just gives a bit of interest which I feel elevates the look a little. 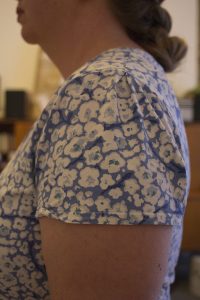 I actually got this idea from version 1 – I needed to raise the shoulders of that version by a full inch to get it to sit right, which kind of worked but I took a rather hacky approach to it instead of unpicking a bunch of stuff and redoing it, which resulted in a pleat of fabric at the top of the sleeve. It doesn’t look as neat and intentional as this, but it was nice enough to consider how to make it happen properly.

I’ve still got a little bit of work to do on the fit (I think the shoulders could come in another size, to be honest) but I’m pretty darned pleased with it and I feel it’s good enough to forge ahead with the current version as the template for a top I’m making for our performance at Huddersfield Contemporary Music Festival in just over a week – eep! My first attempt at stagewear!