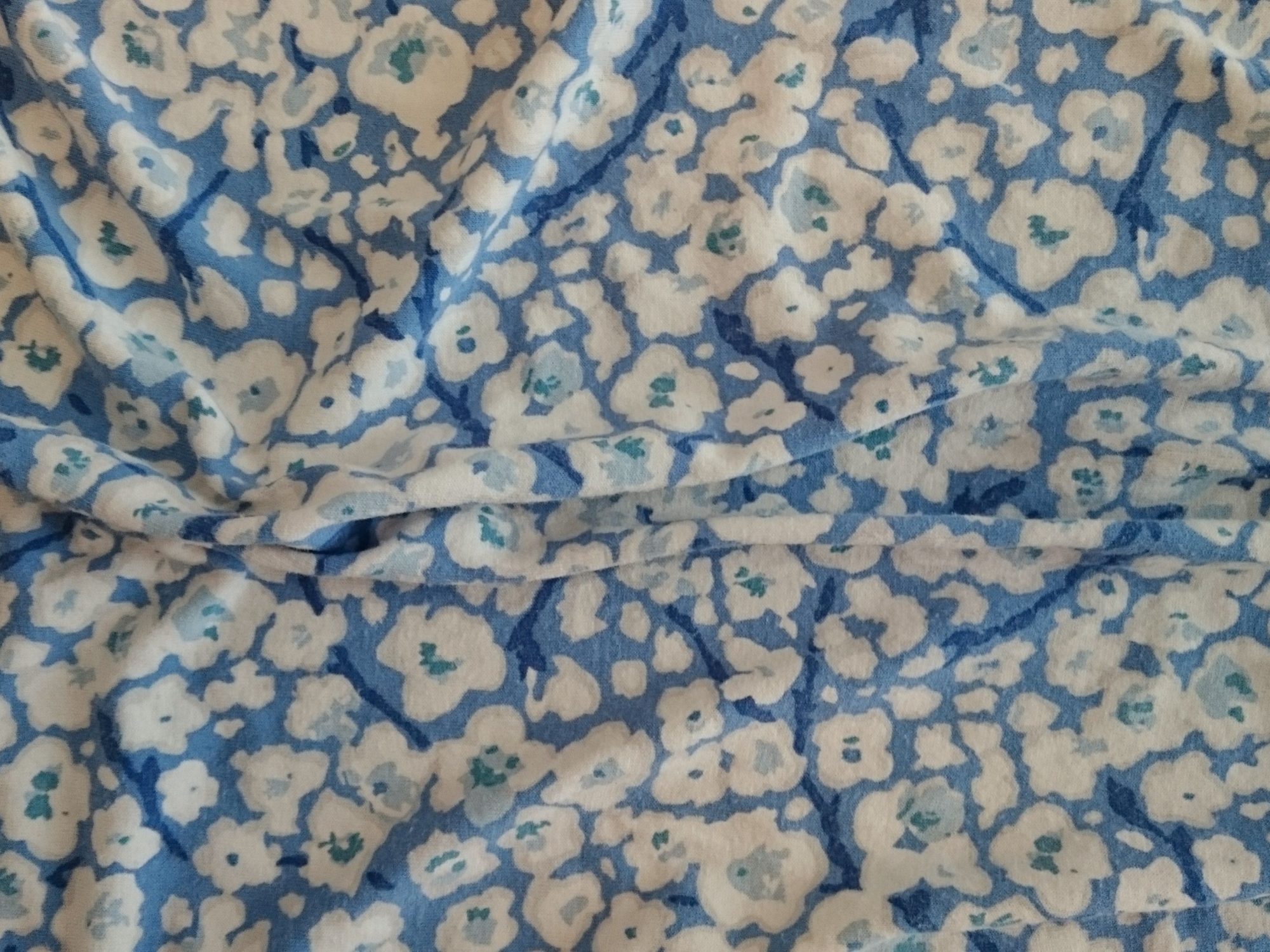 This was going to be a post about a second Rise turtleneck, this time hacked to give it elbow-length sleeves, and while I’m still planning on doing a version like this, I’ve had to admit defeat on this one because it was going to be a refashion, but the fashion industry’s inventiveness has totally outfoxed me…

Several years ago in a fit of misplaced optimism, I bought a very pretty jersey dress. In theory it should have looked great on me – wrap front, quite a good length, extremely pretty fabric (see above) that totally suited me. However, in practice it suffered from the same issues that every other RTW garment ever has – not enough room up top while being simultaneously too big in the shoulders. I kept hoping that it would start looking good on me (um…) yet strangely it never did. As I started to sew I began to understand why – there simply wasn’t enough length in the front to sit properly on me, so while it was comfortable and the colours did wonderful things for my complexion, I never felt at ease in it and the overall effect was frumpy.

A couple of months back, after sewing a number of garments that did make me look good and feel confident, I concluded that this poor dress was in all probability never going to be worn further than the corner shop and was basically just taking up useful wardrobe space, and I had an idea. Yes, I could donate it to the local charity shop where it might find someone it suited who would love it – but what if I took that fab fabric and just made something new out of it that I could actually wear?

I’ve done very little refashioning – only my denim bag, really (which gets a ton of use which as jeans it never would have) – but it’s always appealed to me. I’d just made my black Papercut Rise top and it occurred to me that the short high neck would actually pair really nicely with elbow-length sleeves for a spring top. I considered the amount of fabric in the skirt and came to the conclusion that there was probably enough for the body of the top, and given the pleating at the shoulders of the dress, I figured there should be enough between the two fronts and the back piece to manage to extract two shortish sleeves and the turtleneck.

And then I started to unpick.

So it turned out the “pleats” weren’t actually pleats, but cunningly placed tiny squares of fabric sandwiched between strangely cut sections at the top of each front – which meant that far from opening out into a nice sized piece of usable fabric, I was left with a strange straggly fringey bit at the top and only about 2/3 the size of useful fabric I thought I’d get. Ack!

All was not lost though. As I unpicked the (very short) sleeves, I compared them to the pattern piece for the Rise’s sleeves and hurrah! They’re basically the same shape! Which meant that I could just reuse the sleeves from the dress as sleeves for the top and just add some length to them to be a more flattering length on me.

Alas, though, with the weird cutting of the fronts there actually wasn’t really enough fabric to go around my arms (I think this would apply anyway even if my arms weren’t a little… erm… cuddly) – and there wasn’t enough fabric to cut the turtleneck out of them either without having a seam down the front, or seams on either side of the neck. Which would mean keeping the sleeves at the length they are which feels a little pointless as really short sleeves plus a turtleneck is just a weird sort of combination and I don’t think it’d really get worn.

I have thought of just making sleeves out of a plain coloured fabric and I’m still contemplating this, but I don’t know that it mightn’t feel a bit clunky? So instead I’m setting the whole plan to one side. I’ve a copy of the Union Street Tee pattern, which I’m thinking might be a better match for the really short sleeves – just overall more summery – so the fabric will definitely get used, but alas my dream top is not to be.

So there you go. Not a particularly cheery post, but one I think worth noting in case other beginner would-be-refashioners stumble across this. Check your construction in detail! Be prepared to come up with an alternate plan!

Unfortunately that was going to be a consoling sewing project for today. Don’t know what I’m going to do now – everything else involves pattern-tracing/FBAs/pattern assembly which is a good deal less consoling for a frazzled mind than simply cutting something out and sewing some nice straight seams!