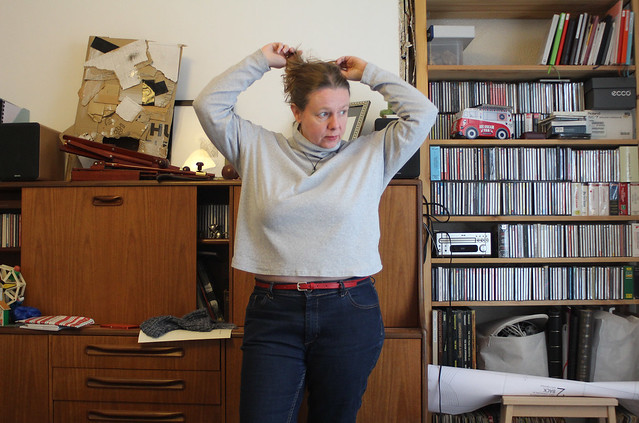 I’m calling this my Christmas Pudding Top because frankly I’ve put on enough extra me over the Christmas break that I really don’t want to think about fitting anything for at least a couple of weeks, but I was cold and feeling at a loose end, so the Papercut Rise Turtleneck stepped into the breach again.

This is my second attempt at this pattern and this version’s turned out much better than the first. I think the thicker fabric is better – a little more stable and less inclined to drift about – than the lightweight viscose/lycra jersey I used for the first one. The pure cotton is definitely easier to cut out! Not nearly so shifty and it turned out to have been produced as a tube of fabric, which I felt was a bit weird but gave me two tidy foldlines just the right width apart for my front & back pieces. It was a little tricky to pin (no idea what was going on there – it was like the pins were sticky, or were just getting stuck on the fibres – maybe something to do with the knit?) but perfectly well-behaved on the sewing machine and both versions sewed up super-fast – 2-3 hours, and I’m a very slow and easily-distracted sewer. For an experienced sewer who doesn’t need to run up and down stairs to press or pin things, I think you’d probably have it sewn in about an hour?

I’m still not 100% convinced that the dropped shoulder is for me, but the comfort, speed of sewing, and the total lack of need to make any serious adjustments at all is a definite win in my book! 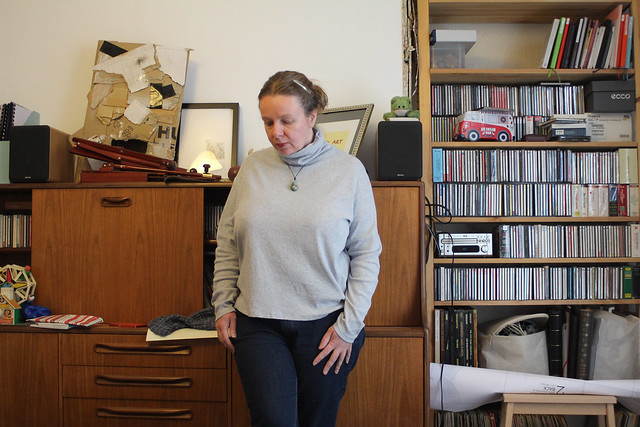 The one adjustment I did make to the pattern when I first traced it off was to add a little bit of length to the front – about an inch and a half. This wass in lieu of doing an FBA – the pattern is designed to be very loose-fitting (most versions I’ve seen blogged, the sewist decided she needed to drop down a size from what the pattern said she needed) so for once the size for what I’d be if I were a B-cup had enough ease to accommodate the actuality of me. This does mean that I get some quite noticeable folds in the fabric at the side of the bust, as you can see in the second photo, but there’s room to move about and it doesn’t bug me too much. Anyway, I just kind of guessed at the length based on where the paper pattern sat on me, front & back, and I’m happy with that, but the curve to get there was a bit too exaggerated. In the first version, the left and right sides are visibly uneven at the bottom because I was kind of adjusting as I pinned: 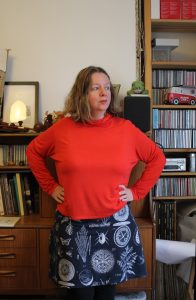 The grey version is much more even because I was watching for it (actually fixing the pattern before I cut it out  would clearly have been ridiculous) and being very careful as I sewed. Also with the cotton being less slippery than the viscose, I guess.

I do plan to make up the ‘Rise’ version too, but as this is a much more fitted style it’s going to need an FBA so I’m waiting for the departure of at least some of the pudding before I attempt this.

Size: M, with front lengthened by about 1.5inches