FINALLY managed to get a photo of this. With sheep. At the Kent County Show. 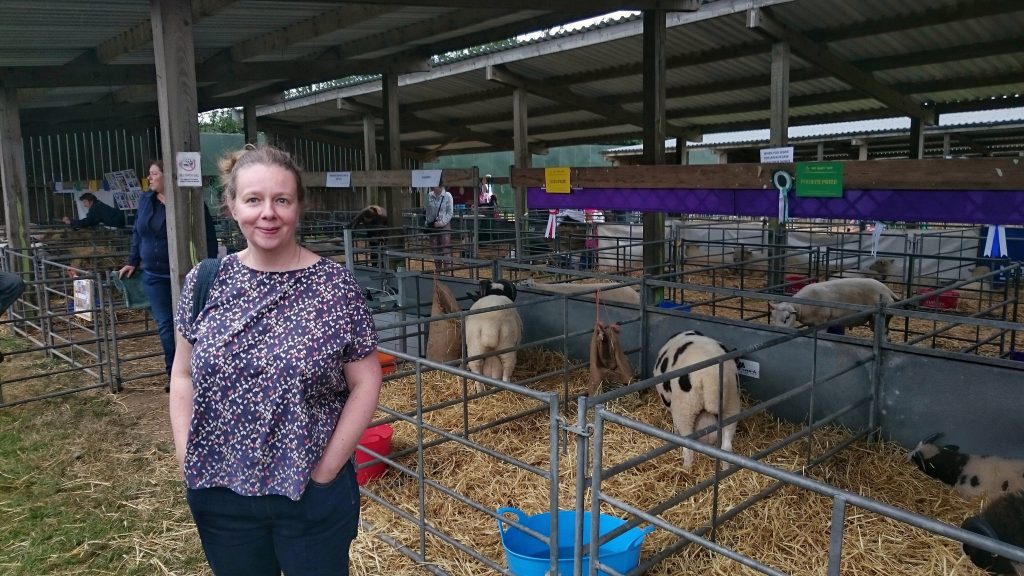 So this one was pretty straightforward. The fabric is a cotton batiste from Atelier Brunette and was gorgeous to sew with. So well-behaved! And fantastic for a first adventure in a new pattern.

I really love this top, and I’ve had more compliments on it than on any other piece of clothing I’ve ever owned, I think. I don’t have a photo of the back because Djelibeybi was being a little reluctant to take photos, but I decided on a very retro mint-green button at the neck, which I think makes for a really nice detail rather than simply a way to keep it closed.

This is the curved hem version (as is the black), which on me makes for a bit of a high-low hem anyway because boobs but it’s still a decent length and very comfy to wear.

The Megan dress hasn’t exactly stalled but I finally got the zipper in… then came to the conclusion that I’ll probably never wear it – too firm in front, too loose in back, overall it feels a bit of a mess when it’s on. So I think I’ll forge ahead with the sleeves just for the practice, then rip it apart and turn the skirt into a Noodlehead Runaround bag. I think another version while I’m getting the FBA right feels a bit wasteful, so I think I’m going to invest in a sort of fitted-blouse pattern to practice FBA with an existing dart – less fabric to waste if it goes wrong again, but if it works I’ll still get a whole garment. Thinking maybe the Sewaholic Alma blouse would be pretty on me, and I like that it has both short- and long-sleeve versions so once I get the adjustment right I can make it up for winter too. Looking at the photos on Google, it seems to be the blouse that nobody can truly mess up, so I think that’s a plan.

As for today, I’m having my first go at making yoghurt from scratch (Djelibeybi’s got pretty good at it but now he’s going to be living in Germany, I need to know how to do it myself), and am piecing together the pattern for the Sew DIY Nita Wrap Skirt for which I have yet another piece of Ikea fabric in the wash now. Sewing-obsessed? Moi?