I’m in this weird headspace at the moment where I kind of want to sew something, but I’m also kind of massively disheartened and it’s all to do with the Megan dress. I kind of made myself commit to doing the sleeves on it, but it all felt so pointless because it’s a bit of a mess and I’d already decided that it was going to be cut up and the fabric turned into a Runaround bag because the FBA isn’t right and the whole bodice/skirt connection isn’t right and it’s baggy at the back and just argh (hey, my invisible zip is PERFECT though!)

But not doing the sleeves is also kind of holding up anything else I might want to sew because I’ve got this half-finished, not-right thing drifting about looking at me accusingly.

So I came to a decision. I decided to not finish the Megan at all, abandon the sleeves (after all the sleeves on the Alma pattern I’ve bought to practice the FBA on work in exactly the same way, so I’ll get to do it then) and just declare it a failure and move on. But I figured it would be good to document it for my own notes, so I put it on. 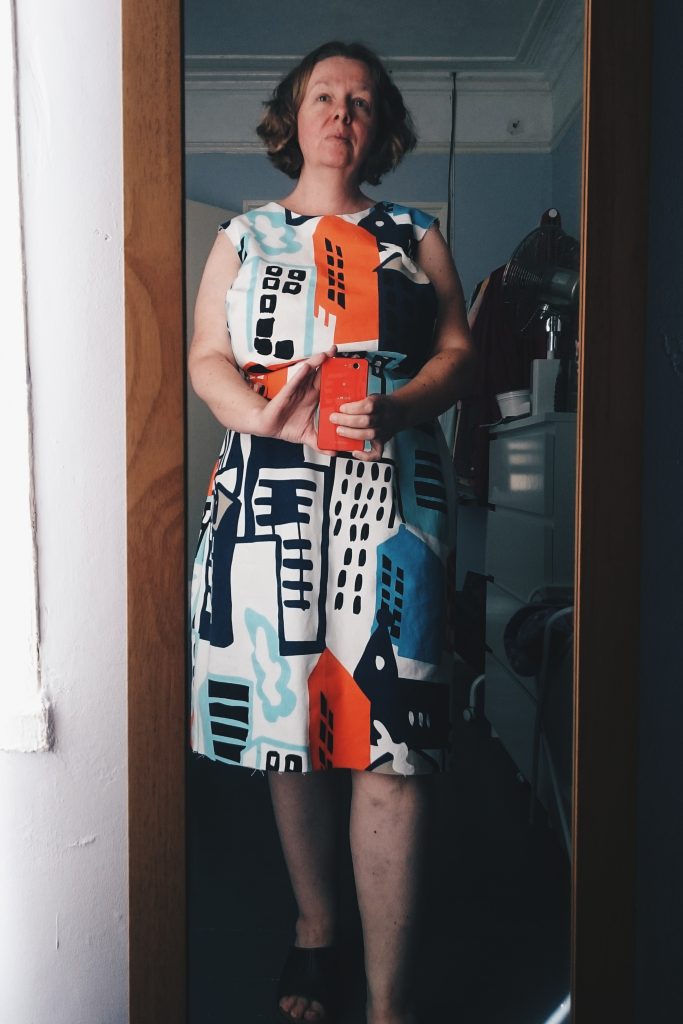 And actually it’s more comfortable than I remember. And the colours are great on me. And. And. Oh bugger. Clearly it’s never going to be good enough to really wear in public, which makes me think that there’s no point to it, but maybe I’d wear it around the house? And then I noticed some bits and pieces that maybe I can fix, but it’s probably better to have the sleeves in to see how it all sits to determine what’s actually going on.

So what have I discovered:

So. There’s not much I can do about the fold and side length and so on unless I unpick things and patch in fabric, but as the FBA work needs to be redone for next time anyway, I think this is just a matter of taking note. Possibly a slightly smaller FBA (which is probably what I need anyway because of the bagginess) – maybe 1.5″ instead of 1.75″? – would sort this out.

However, I might still be able to fudge a rework of the darts and see if that improves the way they lie, in which case I would be able to definitively note down a distance of 3.5 inches for future FBAs, which would be very useful to know – at the time I did a bunch of internet research to see where they should come and everyone seemed to be saying that even if one was oversized in this area, 2.5 inches should do it, but I think it’s clear to me now that it won’t.

Actually… I’ve just realised that I trimmed the immense quantity of fabric that was in the darts, so changing them will probably make the bodice unwearable anyway, but the info gathered from the exercise should be incredibly helpful, so I think I have a new resolution:

Wow. Full marks for thinking out loud. Sorry about that. But yay! Plan!