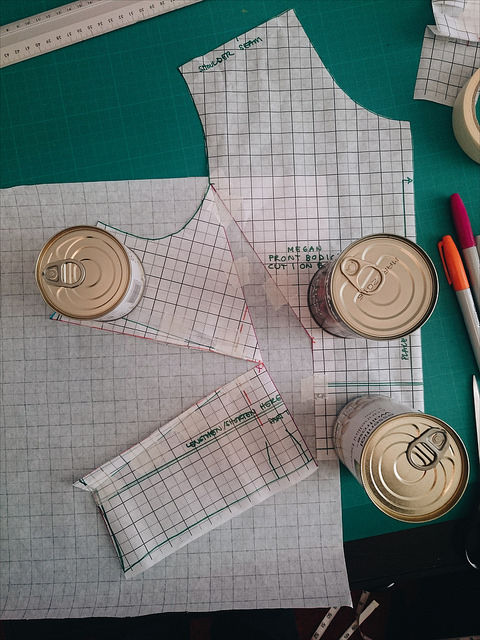 This week I’ve taken a Great Leap Forward in my big sewing adventure. I am, as they say, generously endowed in the chest department, which means that tops don’t fit me. Like, ever. Unless I buy them from Pepperberry, who in recent years seem to have developed an aversion to natural fibres. Or they make everything in clingy jersey which doesn’t work for those of us who haven’t managed to achieve waistline perfection. So one of the things I want to do with this whole sewing lark is to be able to make tops and dresses for myself that ACTUALLY FIT. Gasp. Horror. What a novel concept. The top I made the other week works with zero shaping, but it’s not a look I can get away with for everything and really when I’m less porky (which I am gradually achieving) I look better in clothes which are actually a bit more tailored.

The world of sewing blogs is littered with the phrase “the dreaded FBA” (Full Bust Adjustment) to the point where “dreaded” and “FBA” seem to be part of the same term. This is a little intimidating, to say the least, but buoyed by my so-far sewing triumphs (I finished the Delphine skirt from Love at First Stitch about a week ago, have already worn it three times and absolutely LOVE it), I figured that it wouldn’t avail me anything to avoid it because, given my shape, 99% of things I make for my top half are going to need it. So I signed up for a Craftsy course called Adjust the Bust, watched the videos and committed myself to FBA-ing the Megan dress, which is the next project in Love at First Stitch.

The Craftsy course has been very clear and helpful and I’m sure I’ll refer to it loads in future too, as it covers adjustments for no-dart tops, tops with darts and princess seams. And while I wouldn’t call this one an unqualified success, I’m still pretty pleased with it. Definitely a ‘wearable toile’ for round the house at least.

It was all a little daunting though, I do confess. First up, going from a pattern drafted for a B-cup and needing to FBA that to fit a K-cup results in adding a truly terrifying amount of space into the pattern: 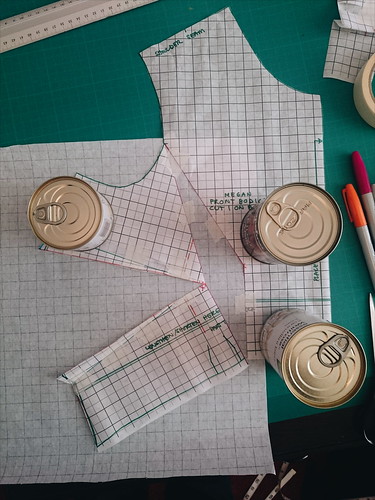 So it turns out that what was needed was not one bust dart but two, stacked on top of each other. How did women work this sort of thing out without the internet??? So many helpful tutorials and blog posts, demonstrating what was needed and makes where things went either right or terribly wrong. So I got those happening OK and miracle! Suddenly there was room in the bodice for my ‘lady cargo’!!! AMAZING! It’s actually a little large so I need to have another go and I suspect I’m still several toiles away from getting this dress right, but to have something I fit into on first attempt is amazing.

Another problem is that while I’ve added about 3 inches to the pattern height, I think there still needs to be a bit more space between the bottom of the lower dart and the edge of the pattern piece because I have a sort of fold of fabric in front which I think is where the lower dart is intersecting with the results of the dart tucks along the lower edge. Given that I had to lower the dart given on the pattern to start with, and then the FBAed darts ended up so enormous, I think another inch in height might sort this out. I also think I got the reshaping of the side seam wrong after the darts were made, and am hoping to sort that out properly with another go. Especially now that I have a French curve and don’t need to just draw changes in freehand. The bodice ended up being quite fitted directly under the bust (and was a little uneven so then I took it in a bit more to even it up which was a silly thing to do) and then the skirt’s top edge didn’t line up so I did some freehand sewing to take that in and… oh dear. It’s OK. I did manage to match up my front and back darts/dart tucks between top and bottom but the side seam alignment was really off so I’ll pay more attention to that next time. I think I confused myself anyway because of grading between a size 6 for shoulders/’bust’ (which is to say what that would have been if God had been less generous with me there) and 8 for waist. I hadn’t realised that the bodice ends so high though – at pretty much the smallest part of my torso, so I could possibly have got away with not grading out, or only grading to a 7, moving to 8 at the top of the skirt and then back to the 7 for the hips.

Eep. SO COMPLICATED. But I’m really glad I did it. And I need to keep working on this so I don’t get into a ‘dreaded FBA’ mindset but just accept it as a necessary part of making a top or dress. I also need to accept that any new pattern is likely to require at least 1 toile to ensure I get it right. Suspect I’m going to become very familiar with the cheaper fabric shops of London…

I’m still working on the Megan dress, but I did lose heart a bit when I encountered the bodice-doesn’t-quite-meet-skirt issues so lost a little momentum and while I put together the main part of the dress in a day I’m now scaling back to just complete one task a day. Today that’s getting J to help me fit the back of the dress so I can put in the invisible zip. Tomorrow will be sleeves. I’m out on Thursday so it can just hang in preparation for hemming it on Friday, which I think will be a useful exercise too in preparation for the next version so I can shorten or lengthen the skirt pieces before cutting them. I think a below-knee skirt length would be good for this dress, to balance the bulk of my top half and the large-scale pattern.

In the meantime I’ve cut out a second Lou Box Top which I’m planning on getting started on today. This one’s just plain black but I’m trying out the scoopneck version, and may also add the pocket to give it a little extra interest. I found a cheap viscose fabric at Rolls and Rems, so it’s got rather more drape than the cotton I made the last one in – I’ll be interested to see how this sews and how much of a change it makes to the overall effect.