Today’s big task has been to try to work out how to crop the black off the sides of my photo-image video. Easier said than done, it seems. Neither Final Cut Express nor iMovie nor Camtasia (the video software I have on my computer) will crop anything – it seems to be the realm of weird little badly documented shareware programmes, mostly for Windows. First up I tried out AviDemux. I think this may be the one I used to crop the video footage of Julia Weatherley’s performance of Breadcrumbs in my final recital last year. It *seemed* to crop OK, but then the export was peculiar (didn’t add a file extension, no options apparent to set exported file format, turned out to be readable with an AVI extension) and didn’t crop it and only seemed to reduce the quality of the original. VirtualDub, which was also recommended by the internet, turned out to be Windows-only. I do have Windows on this laptop but it makes everything run soooooo sllllooooooowly that I avoid using it for anything at all, and attempting to do any sort of video processing on it felt like a one-way ticket to Crashville. Plus it also seems to be geared towards AVIs. I don’t know nearly enough about video formats, but isn’t that some kind of low-res Windows thing? Then I got distracted by a description of a ‘Crop’ feature in iMovie which I was sure I checked out last year for Breadcrumbs, but lo, ’twas a LIE, a devilish LIE. It’s a thing to crop the length of a clip, not crop in the Photoshop sense. And so I poked and wandered and sighed and tested to no avail. And then I thought, ‘I wonder if Handbrake has any sort of option’ and LO! THERE IT WAS! It even detects the necessary crop for you! It did take me a couple of goes to tweak it correctly – the auto-crop was close, but left a black line on the left and the top of the image in places, but it allows you to tweak the settings, so I did and re-exported a couple of times. And the best bit? While it doesn’t save as MOV, you can save as high-quality MP4 – and Max will read the file!!! HUZZAH! So now that that’s sorted, time to get back to the playing. __ So I went back to the patches I created yesterday. I’m really not comfortable with my face being in these things, so I dug out a video I made aaages ago, the day I first visited Gravesend, down by the Thames to act as the second video. As this was a different aspect ratio, I used the VIZZIE Zoomr module so that I could zoom in on the river footage so that it would neatly overlay the other stuff. The automated bits are working well on the other modules, but the zooming I didn’t want to be even, so I built a tiny module which randomises the bangs from a metro object to change the zoom level: 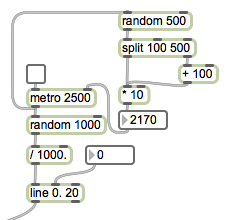 I’ve not used split before, but found it after having a little trouble getting if/then/else to work with my calculations (need to investigate that further sometime) and I’m pleased with it in this situation. I liked the result from this, although for some reason, the automation seems to be randomly flipping the image too. I’m totally cool with this – I quite like the effect – I just have no idea what’s causing it as this should only be affecting the zoom level. Weird. But nice 🙂 However, I felt that things were just flipping by too fast and sometimes I just wanted a big red pause button to savour an effect here or there. So I made a button to send a bang to all the checkboxes at once. And it kind of works OK – I mean, it pauses the effect changes and switches them back on again (although I need to make sure they’re all on or all off, because of the whole toggle thing), however, it’s quite slow to respond, I’m finding. So it’s a little slow to register I’ve clicked it and then it takes another moment to toggle off the checkboxes – by which time the effect I wanted to pause on is long gone. Not sure if this is just my computer being slow (more RAM! more RAM!) or would do this anyway. So I made another attempt. I think this one is just too long, although the pause button I think does help to make the pacing a little less frenetic overall (although it still makes me feel a little seasick…) Now that I’m really quite involved in patch-development, I did feel it was probably a good time to post the patch itself, in case anyone wants to peer at it and go Tsk. This is actually the first time I’ve ever attempted to fiddle with a proper Presentation Mode layout. Hope it makes sense… Download photos5.maxpat Not entirely sure what I’ll be focusing on tomorrow. I think I’m probably reaching a point where I should shut down this patch, set it in stone and work my way through improvisations and settle on one, then start a new patch. I’m learning a lot, but I’m still a bit vague about what it is I’m actually doing with this video stuff and how it will fit into the whole piece. I did do some forward-planning today and ordered 2 second-hand books on video art from Amazon – I’m off to Cambridge for two nights next week and want to make sure that I can still do some CP work while I’m gone, even though I won’t have my laptop with me.