I’ve been a wreck today – the past three days of no sleep, ceaseless activity and poor nutrition finally caught up with me so I’ve spent most of the day in a cycle of read-sleep-read-think-sleep-read-make notes-sleep-repeat until bedtime. I’m in a ‘make notes’ cycle at the moment 🙂

The reading has been continuing on with Florence de Méredieu’s Digital and Video Art and I think I’m in a better position to give a proper critique of this book today, given that I’ve been able to read without being continually interrupted by announcements or planes taking off or children shrieking or whatever. And the verdict is that it’s fantastic. Really fascinating, the way it’s laid out, separating the main essay from the artist profile sections, is truly excellent, allowing you to either delve further into one artist straight after reading about them, or to saunter back later. But the best bit I think is the bibliographies. Every major section of the main essay, and every artist box, has its own little biography. No poking about in footnotes trying to work out what to read to find out more on a subject – this is SO helpful, especially for a book which is designed to be an introduction, because it just makes it so easy to take that next step. I’ve already added a book on Bill Viola to my Amazon wishlist on the basis of these and I’m sure there’ll be more as I go along!

I do still think that having the Thames & Hudson book is a good foil to this one though – the large-format images and focus on artworks is a useful balance, and there are things that de Méredieu refers to that are illustrated in the T&H.

I started by considering my options for combining material:

which gives (I think) 11 possible combinations of audio, video and L/R channels of sound. Eek.

So that felt a bit daunting but good to have it mapped out. Next I wanted to consider an idea I had earlier this week about using the idea of foreground/middle ground/background in combining these tracks. So I considered some of the elements which I might apply or categorise in terms of audio in particular, which might determine which strand would be foreground and which would be further back. For this I came up with a starting list of:

The next step was to consider the structure of the piece and, because I want to set up a containing Max patch that will run without me improvising my way through it (at least to start with), I figured I needed to determine what aspects of the piece would be crafted, what arbitrarily set by me, and what would be decided by the computer through random processes.

Duration, I felt, was necessary to be determined beforehand as otherwise I would need to intervene to tell the programme to stop. Most of the bits I’ve created so far are about 6-7 minutes long. I definitely wanted the final piece to be longer than this, to allow some scope for repetition and for each segment to be heard, so I’ve settled on a starting duration of 15 minutes. Or 20 minutes. Probably 15 minutes. I think I’ll set a control to be able to adjust this for different runs of the patch so I can run tests with shorter and much longer durations to gauge the effect.

I came up with a basic sort of structure, going from simple to chaotic with a sudden return to simple again (it occurred to me afterwards that this is essentially the same structure as my Still River Air) (Apologies for the crappy photo. Will try harder.) 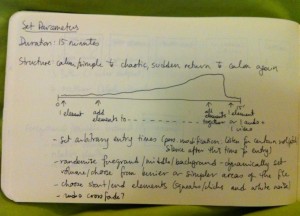 and decided to set arbitrary entry points for accumulating tracks over the course of the piece. At this point I began to pinpoint the things that will be determined randomly – start and end points for sections of tracks (because I don’t want to just use the whole of each of them – I want them to be all different lengths and coming and going, hiding and revealing other stuff), volume envelopes, applying foreground/middle/background parameters.

Finally I returned to my structure diagram and decided that my arbitrary entry points will be based on golden section proportions. I need to work these out as, I guess, percentages of the whole and then calculate the exact durations based on the current whole-of-piece duration setting. At each of these points I’m going to need to work out what’s still playing from the previous section, what new thing is starting up, dynamics/foreground stuff, left/right channels or silence, and how any video is going to relate to the audio. 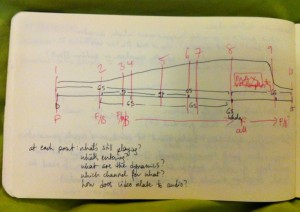 I think the video sections will be more structured than the audio. I think the new video will always be on top, the one I just made the background because I don’t know that it’ll make much sense the other way around. Either could appear on their own. The new video is going to consist of drawn lines and probably some text because I’m thinking I want to explicitly incorporate the dualities the piece explores, and to express those relating to visual material visually and those relating to audio as speech. So there’s probably going to be an additional audio track of speech made which may just bypass the whole manipulation process, I’m not sure. The other audio track is definitely going to be white noise sounds – probably sh/s sounds.

On the basis of all this, I’ve also identified some key components that I’ll have to build for this. I think it’ll probably be easiest to build each of these as a separate patch and link them in with bpatchers, so I don’t confuse myself to death with 10,000,000 patch cords and accidentally changing stuff that already works. This will also, I think, make it easier to track which bits are done and which still need to be made or finished.

Tomorrow there WILL be code. Yes, there will. And not nearly so much unconsciousness.

And just to prove I really was at an airshow, here’s a photo of a plane. I have photos of the Red Arrows too but they’re in RAW and I feel the sleepiness creeping up on me again. Maybe tomorrow 🙂 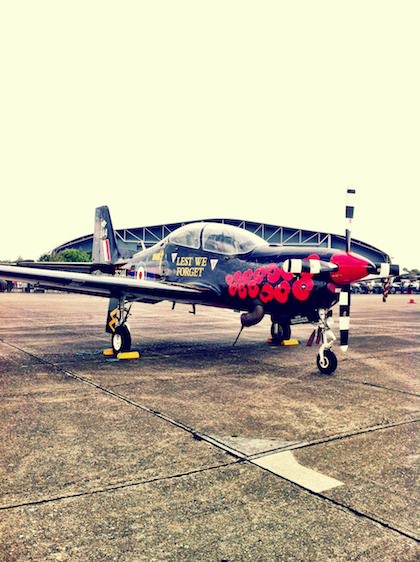