Today we skipped the making part of the day, which was kind of a shame – I’m really enjoying it and it’s the part where at the moment I feel I’m really most involved – but we did a bunch of other stuff and it was nice to mix things up. My big disappointment with the making is that we haven’t been able to make the synthesiser components ourselves. I get that there’s not much time and the really collaborative aspect of the week is creating the final work, but I really wanted to build one. Guess I’ll just have to find a book and do it myself at home some day 😀

Instead, we started the day with working out some of the logistics of the flash piece – how many cameras will make noise? where will all the cameras be positioned on the stage? Do we want to be in complete darkness all the way through or have a low wash of light? That sort of thing. The dancers raised useful points about cables trailing across the stage for the sound-generating cameras, and came up with a good solution, to have the sound generating cameras at the edges of the stage, two at the front, two at the back, so that their cables can go straight offstage and not get in the way of the dance space at all. We also had a brief discussion about costuming. We’re discussing black vs grey and the possibility of leaving as much skin showing as possible to reflect the flash-light. Thank heavens I won’t be onstage!

We split into groups mid-morning to do some composing with the Sudophones and Merztins today, with the aim of performing them at The Duke pub over the road from Laban and in the Laban garden. I really enjoyed this activity as I felt it was something I could be really useful in and I was hugely pleased with the result of our work. 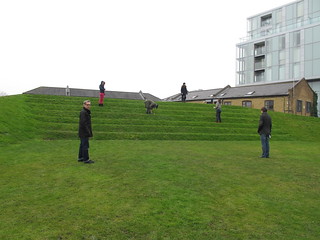 My group – consisting of Liz, Katie, Bianca and me – decided to prepare a piece for the pub. I suggested that, given that we weren’t going to be asking permission to perform it, that we work on the concept of a ‘stealth piece’ – one that started surreptitiously, then ‘came out’, as it were, to be super-noisy at the end. There had been some talk about whether we’d be kicked out of the pub if we performed without permission, so this seemed a good way to tackle that issue and to hopefully be able to at least get most of the way through it!

We started with our Sudophones upside-down to mute the sound, then we’d each gently take our tin, start the sound and tip the tin a little to let the sound out, then close it again and let go to stop the sound. We did this slightly randomly to start, with gaps between the sounds, then moved into a section where we were all making muted/unmuted sounds. Next was the ‘out of the closet’ section, where we boldly grasped our tins and turned them open-end up, continuing to improvise at full volume, then gradually moving into sustained ascending tones, which on multiple Sudophones sounds like they’re all trying to get into tune with each other but not quite succeeding. 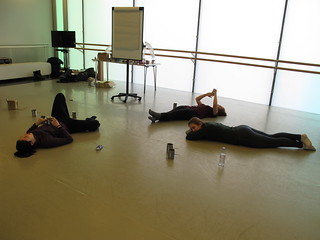 And it went really well! We did the other two groups’ pieces out in the garden on our way to the pub, which was gosh-darned chilly but a lot of fun, then went over to The Duke en masse. We herded in, the barman pushed some tables together for us and we all ordered our drinks and eventually clustered round the table chatting. The chat was going pretty well, so we decided to just start our piece and see if the stealth effect really worked – and it did! Notwithstanding a Little Moment when Katie couldn’t get a sound out of her Sudophone and it turned out she’d forgotten to reconnect the battery 😀 but we just carried on with our stealth mode and gradually the group realised we’d started and our videographer (Cheng) hurriedly switched my camera on.

I upped the stealth factor (I like to think) by continuing to sip my tea through the first part, and it all went down a treat! Really worked well in the context and we got a round of applause from some random guys in the corner. It turned out the director of Laban was also there having lunch – he was a bit surprised by the sound but pretty quickly worked out that we must be a CoLab project. Heh. And the barman brought us a free plate of goats’ cheese risotto! I call that a win!

We spent some good time on the main work in the afternoon, putting together the acoustic instrument parts and I think it’s coming together well. My role is becoming a little more defined now, as I’m working with the instrumentalists to help mould the sounds they’re making to work within the context of the sounds from the cameras. 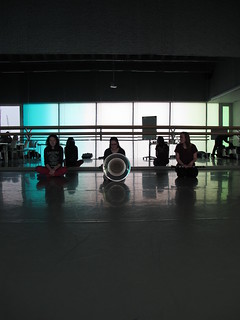 However, we musicians are also staging a small rebellion. Because the dancers have their own piece, Hug, the performers are feeling a bit under-utilised, and because I’m not in anything on stage at all, I kind of wanted to develop something extra. So we’ve suggested to John that we put together a new Sudophone piece, possibly to play while the audience are filing into the auditorium, and he seems to like the idea – and may even want to play in it himself!

So I spent some time with the Sudophones after the other students had gone this evening and have gathered some sounds which I think might work well, which I’ll suggest tomorrow. I don’t think I want to fully compose the piece, more bring along a concept and see where it goes when we start playing it, because if I just write it and they play it, then it’s not much of a collaboration!