Finally we’ve got to CoLab – I can’t believe my year at Trinity Laban is going so fast – it’s just zooming by and I wish it wasn’t! I don’t want to leave! But like it or not, this week is CoLab. I had been a bit nervous at the prospect of an entire week of collaboration – it sounded exciting but also a wee bit terrifying for an unsociable composer 🙂 but so far I’m loving it!

My project is Dirty Electronics with John Richards, which is happening in Studio 7 at Laban. I’ve only been to Laban once before, for Registration, so it’s all shiny and new and trying to find where the lifts are…

Today was quite gentle. We started with a sort of introductory chat session and did some demonstrations to show what we do – the dancers improvised in groups, the performers each played something, and Clemmie (our oboist) agreed to sight-read my piece Nest which I felt was more in the spirit of the thing than just playing one of my deeply inadequate recordings, then we were sent off for a coffee break (very welcome as I hadn’t managed to get any on the way in!) while John and Neil (a PhD student who works with John) set up the tables and soldering irons and prepared to induct us into the crazy world of electronics.

I’m really enjoying what John calls the “making”. He showed us what we’re going to be building, which is an electronic instrument in a disposable camera – the flash works by storing up electricity and we’re going to build a timer to adjust when the flash goes off, and there’ll also be a synthesiser component which makes sound in relation to the flash going off (I don’t entirely understand how it works but they’re related). 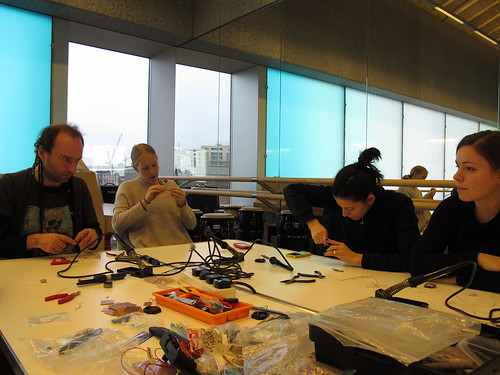 So today we started work on the timer components. We were each given a wafer of circuitboard and John walked us through what went where and taught us how to solder. It’s actually not that hard to put this stuff together! The hard part is evidently in designing the circuit, knowing what parts to use and how to put it all together. By the end of the making part of the day we had assembled our timer circuits! 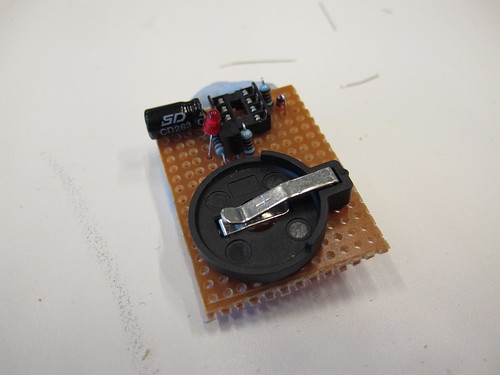 In the afternoon, John introduced us to some of his other instruments – the Sudophone and its variant, the Merztin. These are instruments made out of baked bean tins and bolts (and screws for the Merztin) and have an electronic component and a small speaker inside. John demonstrated how they work by having us all hold hands. He held the Sudophone while I held the bolt, but it wouldn’t make a sound until we all held hands around the circle. The idea is that you make a circuit with your body, so if you only have one hand on the instrument, it doesn’t make a noise, but once you touch it with your other hand, you complete the circuit and get the sound. Very cool! 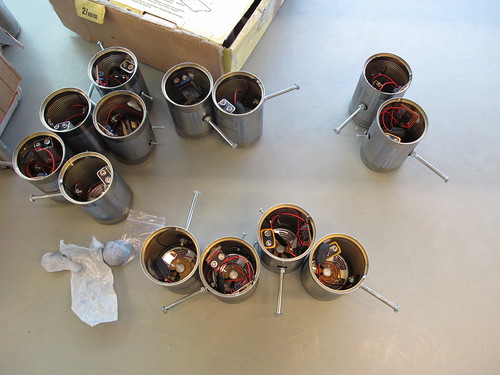 The other instrument he showed us is a cardboard speaker with a static-making component inside it. Very noisy! He told us about a work he created, called Hug, which uses this instrument and the goal is to mute it with the body. The dancers may work on this later in the week.

We also started work on some sounds for the acoustic musicians to use in the performance. We’re working on a premise of replicating the electronic sound (to a certain extent). This consists of an ascending tone, in two parts – the first part starts below the threshold of hearing and moves upwards until the flash goes off, when it leaps up and continues to ascend to above the threshold of hearing. I joined Gaspar at the piano for this part, messing around with playing on the treble strings, treble clusters and trying some percussive sounds on the piano too.

And we got an early mark! Which has been most welcome as I need to finish prepping my Runswick Prize piece tonight!