A great productive day today. After last night’s last-minute start to the Ansel Adams piece (I updated the blog at 12.30am to report it at 30 seconds long. It’s now a full minute!), I’ve been on the trail of this piece with a vengeance today. All of a sudden everything became clear – which images to use, how to work with them, what I wanted the overall concept of the piece to be. I opened up Procreate on the iPad for the first time since I downloaded it on special months ago, looked at a rough tutorial for it (ooh! it does proper pencil sketching! MUST try this out soon!) and drew up a plan. Interestingly, colour doesn’t feature in this plan. Of course it’ll affect the final piece, but I’ve got kind of a monochrome thing going on, which plays well with the whole black-and-white photography thing. The lines/shading on the plan don’t really reflect musical movement, but rather indicate which images will be the basis for which part. Each of the three blocks is planned to be about 3 minutes long, giving a total length of around 9 minutes, which gives a bit of leeway in both directions for the specification of 8-10 minutes. 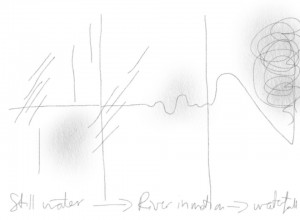 So what I am planning for this piece? Well, rather than focus on one image, or one set of images around a single focus, it’s going to kind of encapsulate the exhibition. Yes, I know that sounds excruciatingly ambitious. The title of the exhibition is “Photography from the Mountains to the Sea” and the piece is going to follow a similar progression: From still waters, through moving water (rivers, etc.) through to waterfalls. These are the images I’m using for the sections (Apologies for using links instead of embedding these, but I don’t want to get in copyright trouble over this and there are quite a few of them! I’ve tried to link to official-ish sources, but if you Google the name there are often larger versions of the images elsewhere):

Rivers
I’m not 100% settled on these ones, but these images will give an idea of what I’m thinking of:

The images in sections 1 & 3 were some of my favourites in the whole exhibition. The section 1 images in particular had me absolutely spellbound.

I’m still working out what to do with instrumentation and how to make the best use of the crazy ensemble. What we have to work with is:

We have to use everything in the ensemble, so no rejecting the guitar on the grounds that it’s similar to the harp, or chucking the saxes because it’s too wind-heavy. It’s very low on bass instruments, so I’m thinking one of the saxes may need to be a baritone, and the clarinet may need to be swapped for a bass clarinet instead.

I’ve had two main ideas for using the ensemble, both of which involve dividing up the instruments into opposing groups.

Idea 1 is winds vs strings vs percussion, where “winds” includes the voice, “strings” only the violins and cello, and “percussion” is keyboard, harp, guitar and drumkit, each one taking a section of the piece. After thinking on this for a little though, I think this will be too restrictive and clear-cut. I want to blur things a little too, so…

Idea 2 is to use one principal percussion instrument per section: maybe guitar, then keyboard, then harp, with the drumkit throughout, with melodic interest focused on flutes/clarinet/saxes for part 1, strings and voice for part 2 and a mixture (perhaps making use of some of the doubling options to give a more expanded sound) for part 3.

Today was also the last day the college library was open so I trekked in to stock up, expecting loads of other students to have done the same, but the place was a ghost town! I had to distract the cafe lass from her iPhone to get a cappuccino and it seemed like this was the most interesting thing she’d had happen all day! Ran into a couple of friends, but apart from them, it was pretty much silent as the grave.

I’ve brought back the score to Elliott Carter’s Esprit Rude/Esprit Doux for flute and clarinet, which inspired the opening texture of the Ansel Adams piece, so I wanted to have a more thorough listen to it than I got at the London Sinfonietta’s New Music Show 3 the other week. Also Stephen Montague’s Snowscape, which he recommended I look at as an example of a piece that is quite loose in interpretation that might be useful for Fear of Falling. Also a couple of books on art and music which I hadn’t seen there before, the Alfred Blatter book on orchestration (recommended for our Orchestration – Large class but not required, which is why I haven’t yet invested in it), and there were a new batch of ex-library CDs on sale and I accidentally came away with the complete (or near-complete) orchestral works of Honegger, and song cycles by Vaughan Williams and Holst. Whoops.

Got a bit more research done on the Twombly project too. Still thinking about whether to stick with the mushrooms or try to work from paintings I don’t have access too. Um.

Oh! And did some thinking/talking about the Rude Health concerts with a couple of friends and we went and checked out the Peacock Room together, which is where they’ll be held. There’s a tiny organ in there! Super-excited about that. Might have to make use of it…