Yep, that would be me. I know this is a little after the fact (well, about a week after the fact) but it’s time to face facts and admit the truth:

I have once again failed at Creative Pact

Not as bad a fail as last year, I think, but still, a failure’s a failure and I’m rather disappointed. I nearly wrote “disappointed in myself” but that’s not actually true. I wish I’d got more work done, and I wish that Lilies on the Silver Sea had actually worked, but I’m actually quite pleased with what I DID accomplish, especially with everything that was going on with the house and, in the final week, awful stressful clashes with our temporary accommodation landlord, including at one point him ringing me up and shouting at me, swearing at me and calling me a liar for no reason except he was in a temper. Given the circumstances towards the end of the month, I’m rather proud I managed to write anything at all.

The stress, however, has sent my creative brain into hiding again and it’s only just starting to peep out to see if the coast is clear. I do wish I could have had a calm week or two to act as a holiday before the start of my Masters degree (currently at the end of the first induction week) because looking at the timetable and assessment schedule and so on is kind of terrifying and I’m just emotionally exhausted (and a little bit physically exhausted too) by everything that’s happened in the lead-up to actually moving in here.

But we are moved in. And it’s better, if not ideal. We have a working shower, even if we only have an outside loo and are cleaning our teeth in the kitchen sink. We have a working washing machine and have discovered that if we close the window to the front basement room the clothes actually dry faster. We’re coping OK with the no-kitchen thing: tonight I made paella on the barbecue in our new paella pan we bought in Spain. So it’s all gradually coming under control at least. 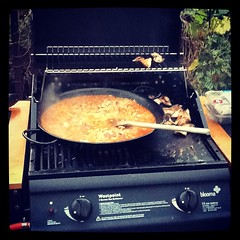 So where did I end up with the pieces?

Well, Lilies on the Silver Sea is a non-starter. In spite of all the work I did on it, I don’t much like any of the fragments I wrote for it, or not for the quarter-tone alto flute. Maybe they can be used for something else. I think the piece I was trying to write is a group piece, not a solo, so it may yet turn into something else. I’ll need to start again for something for Carla

Ladders of Escape is getting there. I have been wondering lately whether perhaps I tried to take on too much by trying a new way of working and new ways of thinking in both these pieces – working with extended techniques and quarter-tones is not something I’ve done much of before, and never in an extended piece. Maybe I should have tried to do it using my usual techniques in spite of Finale’s inadequacies. At any rate, Movement 1 is essentially finished, just need to work it over checking ranges and maybe adding in some more multiphonics which kind of dropped out in the second half because I forgot about them in my hurry to sketch it all out. I think I need to go back and look at my Miro catalogue again to get some ideas about the 2nd movement. I know I want it to be faster than the first movement but that’s about as far as I’ve got. I haven’t managed to get the first movement complete for Pink Noise’s final rehearsal before Jen goes away for a bit.

Stuff I’ve learned in spite of the failure:

So. *sigh*. That’s that then. And now I’m diving head-first into my Masters degree and I’m not sure how/whether I should incorporate these two pieces into the work I do for that. Need to think about that…

In happier news, I’m back working on a new piano egg and today I listened to some Debussy, Carl Vine’s Oboe Concerto and Peter Sculthorpe’s Piano Concerto. It’s been too long since I’ve done any serious listening. Must get back into it!