Just a quick update before I stagger off to bed – we’ve been at the house or out and about doing housey things from 9 this morning through till 8 or so tonight, so you can imagine the state of me. I don’t have terribly much to show for it – the bedroom is now mopped and half-scrubbed, but there’s some clarity on some stuff and some confusion on others. 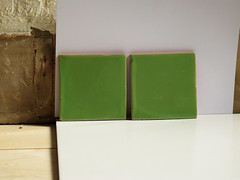