Yesterday was the first time I’d been out to the house alone. I guess that’s a pretty big step. It was kind of nice, being alone there, quietly (or not so quietly – singing along to my iPod on random at the top of my voice while I worked 😀 ) working to make it nice.

And I got a fair bit done too, if I may say so – my original plan was just to get some more mopping done and see what happened. The mopping ended up involving removing a bunch of nails left over from when the boards under the carpet were taken up, so was a lot more strenuous and time-consuming than it sounds – as I swiped the the mop over the floor it would catch on any protruding nail – some I could remove, others I just had to bash down with a hammer so they were level with the floor instead of sticking up. Some of the nails I pulled up were actually screws – screws that had evidently been used as nails for some bizarre unknown reason.

As planned, I took a photo of how the floor had dried after the last mopping – still quite light (I suspect I mostly was just pushing mud around by the time I washed this patch) but there’s a visible difference between the mopped and unmopped part. 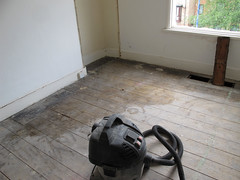 I guess I kind of felt inspired, being there alone and working to make the house nice, so after I mopped the whole of the top floor, I set about stripping the wallpaper from one of the walls in Djeli’s study with my steam wallpaper stripping tool. It seemed a good point to start – there’s only half the wall left because so much plaster fell away when we were trying to remove the tiles that had been stuck directly onto it for the bathroom in that room. And it had two layers of the dreaded woodchip wallpaper. We’d heard that that stuff is an absolute cow to remove but the steamer made it really easy. I’m not sure how much that was helped by the pretty intact paint layer underneath, but it’s off now (except for the bits I couldn’t reach because of my wonky post-injury ankles not being happy up ladders) and Djelibeybi has a green wall, which is a vast improvement over the nasty woodchip: 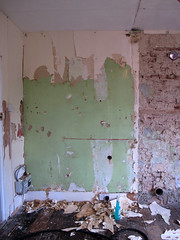 And then I cleaned up all the mess (why didn’t I think to deal with the wallpaper BEFORE I started cleaning the floor???) and mopped it again. So that room has now had 3 moppings and the landing and my room 1 each. This is going to take a while!

The other thing I did yesterday was that we’ve revised our bathroom plan due to finding a picture in Grand Designs magazine of a bathroom, similar in size to ours (it’s a little wider though) and beautifully done, which is making us rethink both tiling and – more critically – what we want to do with the window. So we need to play about with some ideas, and I figured the easiest way would be to have a rough drawing of what the bathroom will look like so we can experiment, so I drew this rather approximate perspective drawing of what we plan to do. The wall straight ahead will be the feature wall with the window, in the shower area, the loo sits back in a small alcove created where the second doorway was, and above the basin are a couple of plate mirrors, similar to those in the picture. 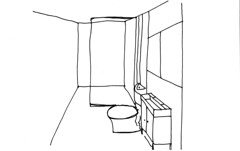 Djelibeybi and I also discussed the question of employment monsters. He’s been taken – he started his new contract this week – but while I’ve been on the brink of sending my CV out for about 3 weeks now, there’s always been something getting in the way – dental trauma, client jobs to be finished, new client jobs turning up, house stuff – and we’ve agreed now that I should focus on these other things until after the move – we’ve got a tight enough timeline as it is and a mere 3 weekends is not going to be nearly enough to get everything clean and nice, even in only 3 or 4 rooms, as well as packing if we’re both working full-time. So that’s that. No employment monster for me just yet.