Yep. That’s me. I have moved on from mopping to scrubbing. Which has led to the discovery of a very important life lesson:

Even though I’ve removed what feels like 10,000 nails from the floor of my study, it seems there’s still another 10,000 more that I couldn’t see because of the dirt. Scrubbing is proving to be both a satisfying – look how CLEAN this is! 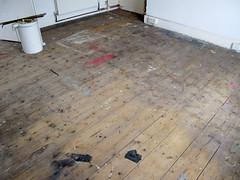 – and a revolting experience – ewwww! look at the filth from one tiny corner! and most of it’s still on the floor waiting to be mopped up! ewwwwwww! 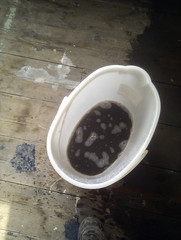 but it’s definitely a worthwhile one. Finally it feels like these rooms may be clean enough to live in when we move in in 3 weeks’ time. It’s also starting to feel like there may be a slim possibility of the bathroom being complete in time for moving in too, even if it’s still awaiting its window and we need to resort to heavy-duty plastic sheeting to keep us decent when showering.

All in all, finally there’s a feeling of it coming together and feeling like an actual home. We’ve made almost all the bathroom decisions now – today should see the boiler ordered, sometime this week we’ll go to Ikea and buy the sink and cabinet (OMG that just made me realise we haven’t even thought about taps!), and yesterday we identified the tiles we want for most of the bathroom so now I just need to find places that sell really stylish mosaics for the feature wall because the affordable-tile places only have tedious ones and I want this wall to be really nice. Fortunately it’s also going to be pretty small so we can afford something a bit pricier because we won’t need very much of it! The builder’s booked in to come and rebuild the far wall (which is supported by a rusty girder so it seemed better to replace it all now than wait until we drop out of the sky while showering), and the plumber’s booked to install the boiler & test the heating while the wall’s being built, then to move straight on to plumbing and tiling the bathroom once the builder’s done. Electrician still needs to be booked in, but I think that’ll happen either today or tomorrow – that one’s in Djeli’s hands.

Progress! These are the tiles we’ve chosen: 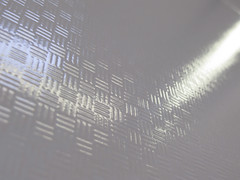 Apart from the scrubbing, I have been continuing to remove the wallpaper in Djeli’s study. This weekend I’ve been focusing on the chimney breast area and I have to say, it’s like the labours of Hercules, but with less manure – there’s so many layers!!!!! From top to bottom there are: 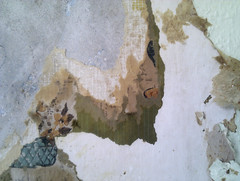 I absolutely adore the lowest layer of wallpaper – I almost wish it extended over the whole wall so that we could keep it! 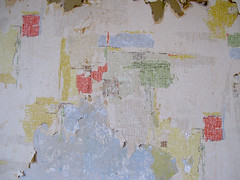 You can see more close-up details in the Flickr set for the house.

The mint green paint is hell. Pure plastic so the steam doesn’t penetrate it unless you rip it up a bit with the scraper to start with. The white paint is not so plasticky but just as determined to stay on the wall. So the cream woodchip comes away easily, then I battle my way through the green layer, then another battle through the white layer.

To add to the woes, the green paint woodchip doesn’t extend over the full wall – in places it’s just green paint directly on cement. And some damn fool has cement rendered directly over layers in places – it looks like they tried to remove the paper but gave up and just slapped the cement on top, so you get to a point where the paper’s been coming away beautifully and then it stops because you’ve just found the concrete.

In other places they’ve spackled cracks or gaps with God-knows-what. Something that hasn’t dried fully, at any rate – some of it’s white, some brown. The brown is cracked and they both scrape quite softly away if you even lightly touch them with the scraper. If you told me the white was toothpaste I would not be surprised. Suspect we’re going to have to dig this crap out and maybe even see if the layer of cement that’s gone over the paper can be removed so we can clean things back properly.

My big concern with this haphazard use of cement and other random materials is about paint. Originally the walls were all plastered using lime, which allows them to breathe and prevents damp. Modern materials like cement and normal plaster though won’t let the house breathe – they’re fine for modern houses which have damp-proof courses, but this one doesn’t so without breathable material on the walls, the damp can’t evaporate and starts to damage the building. And as some fool in the past covered the whole of the outside in concrete render, it really needs to be able to breathe inwardly.

Add to this the problem that modern plastic paints won’t let lime render breathe but many natural paints need a porous surface to be applied to and the problem compounds because to find a paint that will let the lime do its breathing thing while still sticking to the cement bits is going to be quite difficult!

I’m having a lovely time anyway with my new paints books that I showed last time – REALLY interesting. I think I’m leaning towards limewash with added linseed oil for the floors but need to read some more to be certain. I wanted to use casein (milk curds) because the combintion of the casein and lime creates a strong glue-like effect that would ensure the paint would stick to the floor and not just brush off, but being milk, casein paints can be affected by mould if they’re in a damp area, and given that we’re planning to put carpet down as soon as we can (prob October or November), I wouldn’t want to risk someone dropping a glass of water and the paint under the carpet going all mouldy.

However, I’m planning on having a play with casein paint – traditional Shaker milk paints – to repaint the cupboard in the temporary kitchen. It’s a really well made cupboard – solidly build right into the wall, so I’m going to strip back the filthy and chipped plastic paint that’s on it now and repaint it using natural paints. It’s already got battens fixed inside so we’re going to make some shelves from some leftover floorboards and I’ll paint those too.

So that’s where we’re up to. Once I’ve bought some heavy-duty kneepads, I’ll be heading back out there later this week to do some more scrubbing and wallpaper steaming and possibly some paint-removing too. I’m also planning a trip to the wonderful Cornelissen’s to buy pigments for the paints – REALLY looking forward to that one – can’t wait!!!