Today was a mixture of delightful progress and massive frustration. The delightful progress was that our wall is all made! And the plumber’s made a start on the pipework! So the bathroom feels like it’s taking shape properly now, which is super-exciting. 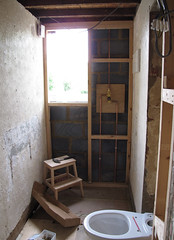 The frustrating bits started out with the taps for the shower having been put in the wrong place. We sent a plan to the plumber about 2 weeks ago with the taps clearly marked as being under the window – this evening we found out that apparently he needs 3 inches of vertical pipe above the taps before changing the direction of the flow to horizontal (to get past the window) or we’ll lose water pressure. Which is all very well, but to which my response is “And you couldn’t have told us this 2 weeks ago before we built the wall??” So now we have to work around it. I suspect I may ask him to at least move it over towards the window as much as he can – part of having the taps under the window was so we’d get a beautiful vertical run on the lovely green tiles (ordered today!) which of course is ruined if the taps are in the middle of it. Going to experiment with pieces of paper tomorrow…

My plan had been to scrub the second half of the bedroom floor this afternoon (first half done on Monday), but as the plumber had moved the circular saw in there and I can’t lift it, that was out. The electrician has a bunch of floorboards up in the upstairs room (he’s finishing tomorrow) so I couldn’t scrub those either. It was too hot to steam wallpaper off the walls.

So I revised my plan: scrub the 1st floor landing and strip the paint off one of the flights of stairs between the ground and 1st floor.

Step one: Apply paint stripper to top three stairs, leaving central patch untouched for access purposes. This went according to plan although the stairs had accumulated a scary amount of dust since I scrubbed them the other day, no doubt due to the building work.

Step two: Decide to see if paint stripper will also work on the dark stain around the edges of the floor in the bedroom. Paint on without incident.

Step four: Start scrubbing the landing. Unlike in my study upstairs, the sticky remnant of carpet backing is stuck fast to the floor and no amount of scrubbing will shift it. Scrub like a demon to little avail (although the bare wood patches yielded a fair amount of muck)

Three quarters of the way through the scrubbing the builder arrived for sign-off on the wall, so I chatted with him a bit while we waited for Djeli to turn up. Basically, the wall is beautiful and has been signed off. The secure door into the back garden will take a little while yet though, so for now the old door stays nailed to the wall and we won’t be getting a skip for the weekend.

At this point, everything went to pieces: Djeli forgot to watch his feet while going down the stairs, slipped on the paint stripper and ended up with stripper all over his shirt, meaning I had to embark on some emergency laundering to ensure his good work shirt didn’t develop paint-stripper holes all down the arms.

Djeli started taking the tiles he’d picked up out of the car, while I suddenly realised the paint stripper had been on for an hour instead of 30 minutes, so nipped back up to scrape it off. Scrape scrape scrape, and yes it was coming off but – oh what a surprise! – there’s another layer underneath, this one pale grey. Scrape scrape ewwwww at the patch in the bedroom which seems to have turned into some kind of truly awful tarlike substance – almost exactly how I imagine the tarpits that swallowed woolly mammoths before there were real people. Absolutely disgusting and stuck fast to the scrubbing brush, water has no effect. Also hasn’t entirely stripped it and I’m wondering if it’s not actually paint but rather some kind of stain. £2 scrubbing brush ruined. 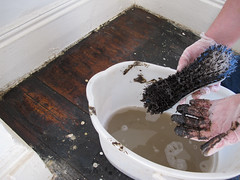 Given the multiple layers on the stairs, I reapplied paint stripper to those then went and carted tiles about with Djeli. Recoated the stripper then went upstairs to start sanding down the door which is going to be my desk. The sandpaper ripped at the corner after a little & Djeli (without looking) said I’d need new paper. Precut sheets couldn’t be found anywhere.

Back to the stairs. Scraped off the paint stripper and there’s ANOTHER layer underneath – this one a sort of vanillaey cream colour. At this point it was about 7pm and Djeli had made noises about sealing the bathroom floor with PVA, so I offered to help him with that after the stairs were done. So I scrubbed my three stairs, then mopped them, resulting in this dismal result for about 3 hours work: 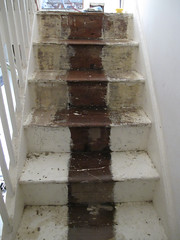 This is really dragging on so I will try to condense – I hung about waiting to help Djeli with the sealing-painting while he kept adjusting things (among them trying to get the shower tray – which used to fit the space – to fit in, which it doesn’t seem to any more), then it turned out I couldn’t help with the sealing anyway because he wanted to use a roller and we only have 1 roller. Tried to fit new sandpaper to the sander, but it turned out the template provided in the box wasn’t actually right. Recut sandpaper and finally got it to fit at which point I lost all will to live.

But on the way home I bought half a litre of milk which I am going to let go lumpy so I can make casein and lime paint for my desk 🙂 Not sure how well it will work, but it’s cheap and if it goes nasty I can always sand it off if I can’t face the paint stripper!

Oh, and it seems that someone has smashed our gas meter so we need to get the gas company out to fit a new one. Yay.