I’m working today, so of course I’ve become totally distracted by housey things. I guess that’s the beauty of working for yourself, eh? In particular, today I am contemplating colours. The whole house needs to be painted, inside and out, and the other day I received the Little Greene paint swatches which are just delicious so I’ve been thinking about what should go where and how to proceed.

Today I’ve read a couple of truly fascinating posts on the blog of Patrick Baty, an authority on architectural paint and colour. The first article, The Heirarchy of Colour in Eighteenth Century Decoration, yielded useful information about which bits to paint what colours – it seems that in the 18th century, the panelling and mouldings on the walls were an interpretation of classical columns (see the diagram in the article) so the wall paint should go all the way up to the top of the cornice – not to the bottom as we were thinking. I would imagine this would also have the effect of making the room seem taller.

The colours Baty shows in this article as “The Common Colours”, interestingly enough, reflect the colours I was thinking of – something like his Pearl Colour on the walls, and Lead Colour on the floors, with white ceilings. I found it interesting to discover that these Common Colours were the cheapest paint colours, and so would have most likely been used in modest homes such as ours. Also interesting to note is that Georgians usually painted the whole house the same colour – no different colours for different rooms, which is comforting for me because that was my original plan, but then I’d been a little concerned that it might feel a little overwhelming. Or boring. But hopefully this means it’ll be OK.

Of course, our house isn’t Eighteenth Century – from what we’ve been able to find out, it was probably built around 1850, officially early Victorian – so it’s Georgian outside, but really more Victorian inside, which kind of poses a conundrum about how to deal with the interiors. The one room (our bedroom) which seems to have original skirting boards and cornices also has picture rails which seem to be genuinely old picture rails, not modern ones that someone’s stuck on afterwards. The thing with this is that – as I understand it – picture rails were a Victorian invention and didn’t exist in the Georgian period. But as it’s there – and from our own experience as tenants, and bearing in mind that we will most likely need to rent the house out at some point, picture rails are fantastic because they allow for easy personalisation of a space without putting holes in the walls. But do we then paint them to match the walls (Georgian approach) or to match the ceiling (Victorian approach, I think)?

Of course, having then read Baty’s article on Lime Plaster and Subsequent Decoration and given the plaster disaster in Djeli’s study: 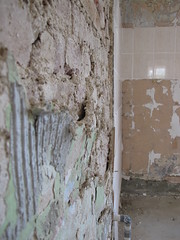 it would seem that after re-rendering – if we do it properly to allow the house to breathe – we may not be able to paint the walls properly for 2 years. But I guess that gives us LOTS of time to really think about what colours to use!

My first step before anything happens is to take casts of all these mouldings & cornices and so on, so that we have a record of what seems to be original so we can make the other rooms match that.

And then there’s the floors. We still seem to have the original boards, but they are FILTHY and bashed around, especially in the loungeroom where some moron decided to saw out a patch instead of just lifting them. It seems that in the Georgian period, where floors were made of cheaper woods such as pine, they would have been painted, possibly with a trompe l’oeil sort of pattern to make it look like it was actually a stone or marble floor. This is more faff than we’re prepared to go into, given the future carpeting – our original plan was to clean and paint the floorboards in the same colour as we’re planning to do the carpet. This will let us test out the colour and make the rooms feel cleaner and more finished until the carpet goes in – plus it will mean we can still have access to lift the floorboards as we build in various forms of cabling, including the home automation stuff that Djeli wants to play with.

However, we seem to have lucked out with the exterior colours. Our original plan was to make the outside of our house match that of our (joined) neighbour, which seems to be the right thing to do. And by a happy chance, the colour that the neighbour has fits with the recommendations in Baty’s Painting of Georgian Buildings post which says that rendered facades should use stone colours. Unfortunately the ironwork on the front of the house is painted black (should be some sort of grey – black came in much later, apparently) and the window frames are white (should be pale stone or off-white) but at least the overall colour will be correct, and it’s a colour we like, and the overall effect is very handsome, if not terribly historically accurate.

The one thing we haven’t really settled on yet is the colour for the front door. Baty’s table says the front door should use “Bronze Greens, Brunswick Greens, Invisible Greens, Red-Browns, Olive Browns”, which rather kills off both our ideas – Djeli had wanted black, and as I grew up in a house with a red door, I always feel a red-door house feels more like home 🙂 but from this list, I’m thinking a nice green might work. Now to run it past Djeli… and get back to work!