The past couple of days have been pretty huge for the renovation project, even though I haven’t actually been at the house.

We’ve ordered a bunch of stuff – the boiler’s coming on Monday, taps for the shower and bathroom sink and a pump so we can have the laundry in the basement are coming on Thursday. And all this spending spree brought on a rather nasty realisation – with the bank having taken so insanely long to let us buy the house, we ended up spending about £6000-8000 more on rent than we’d figured on when we first did our calculations and budget. The bank also insisted on external render works which will cost us about £3000. And what with the bank withholding £2000 and needing to get the bathroom wall replaced, our budget is getting raaaather tight. We both want the windows replaced quite desperately – me because I feel trapped by the hideous picture windows and Djeli because they’re single-glazed and the house is going to be freezing & waste a whole lot of money on vanishing heating as soon as it turns chilly.

So we’ve made a bit of an about-face and come to a big decision: we’re not going to buy a kitchen, we’re going to make it ourselves. About 3 months ago when I had a bit of a book-buying frenzy, one of the books I bought was Terence Conran’s DIY By Design. I got it mostly because it had instructions for making your own bed because it looked like we wouldn’t be buying one for a while, but it also has a Conran-designed kitchen with full instructions to make it yourself. We figure that if we keep things simple, it should be entirely possible for us to make our own kitchen – after all, I never wanted head-height cupboards, our requirements are pretty basic for the most part and Djeli already has some experience making cabinets – he made a special shelf unit to slot into the bathroom cupboard here to hold loo rolls (one of the best things about this flat now!) and a clever pot stand to use some dead space in the kitchen here too.

I’m surprisingly happy about this decision. I expected I’d start to worry but I haven’t. I feel quite liberated, really – most of the prefab kitchens I’ve seen have left me severely underwhelmed by the design while gasping at the cost. The only ones I’ve really liked have been bespoke, which there was never room in the budget for, but I really like the simplicity of the Conran design. I also like that we can start out making it as open shelves and add cupboard doors later if (more likely ‘when’) we get fed up with the dust.

I’ve gone back to looking at range cookers, on the grounds that it’d be easier to install and then we wouldn’t need to worry about cutting holes in a worktop or ensuring there’s enough ventilation in a home-made cabinet for a fitted oven. And I think I may have already found what I want – it’s a tiny 60cm range by Smeg – pyrolitic cleaning, rotisserie, wok burner – everything we wanted, and cheaper than buying a separate oven and cooktop with these features too. 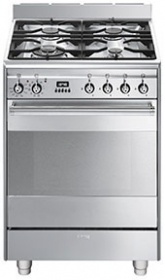 So it’s a big change from the original plan, but I think it’ll be for the best. Djeli seems to think so too, although as usual his brain is bounding ahead of the pack and dreaming of hand-chiselled wooden sinks – I’m all for it, but I think I’ll pick out a normal sink too, just in case 🙂

PS. I now also own a pair of heavy-duty gel kneepads – bring on the scrubbing! Nails, do your worst – you can’t reach my knees now!