So now we own the house! On Friday – six months to the day after we put in the offer – we completed the sale and now the house is ours!

Work has been continuing apace, in spite of my not blogging it for a while and now the house is basically gutted, which is a great step forward. Today it even smelled less dusty than usual, which feels like a huge leap forward.

Since I last wrote, we have dismantled the last of the awful bedsit bathrooms. This one I got to destroy myself in large part 🙂 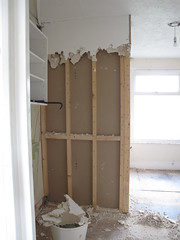 I also uncovered some more of the mid-century kitchen wallpaper in the same room: 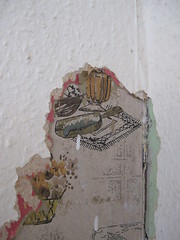 Today’s chat with our neighbour revealed that this house has been bedsits for far longer than we’d thought – which probably explains why there would be kitchen wallpaper in a room right at the top of the house, and only on one wall of that room…

The ‘special’ find of that day was the discovery of a (damp and smelly) bird’s nest in the framework under the shower tray. Djeli found bird’s nests under the main bathroom too – guess those Kentish birds like damp conditions??

Today was a bit less exciting – we dismantled the bathroom frame, I spent a lot of time removing screws from bits of wood and also a lot of time pulling tiles off the walls. This last activity was more stressful than it would seem. The morons who made the bathroom stuck the tiles directly to the (probably original) lime render. Given that that render was probably put on about 160 years ago, and lime render has a tendency towards crumbliness, removing the tiles generally meant a large clump of render came adrift at the same time, exposing the bricks. There’s a whole sequence of the process on Flickr: start here if you’d like to see.

So the work is progressing well, really. A few more days should see us starting to do constructive – instead of destructive – work and I can’t wait for that to happen. On Thursday we’ll be pulling down the ceiling in the kitchen, which will firstly have the benefit of allowing the Rentokil inspector to check the beams and floorboards of the room above for woodworm and rot (we’re using the room above as our basecamp at the moment, so it still has kitchen cabinets and so on in it, which makes it difficult to take up the floor-covering for the inspection), and secondly allow us to put in a new ceiling that doesn’t have holes in it.

Oh, and since I received my new Zoom H1 recorder on Friday, I took it along today and recorded this in the garden 🙂