Well, I thought I was coming out of the cloud last time, but well, not so much. For a while there was getting a bit more done – and especially getting a bunch of listening done, but as time went on and the teeth were still problematic and the back seemed to actually get a bit worse, the cumulus descended and I got a bit lost. Feeling like I’m on the up just a little now though (or should that be down – the cloud goes up. Hum. Think my metaphor’s a bit mixed here!) and starting to be able to think properly. Last week my dentist put in the proper filling and said that the mini-crown is optional because the tooth still has its structural integrity (thank you, o marvellous Italian-South African root canal specialist!) and that if I want it we’ll look at doing it in 6 months. I think I probably will do it – it will provide more solidity and protection – but we’ll do the x-rays then to see if the root canal’s worked to clear the infection fully and then see what else should be done. And then about 2 days after that, the back started improving again. Can you say “psychosymptomatic”? My bite’s still a bit out, and bending down’s still pretty painful, but it feels good to at least have the start of some closure on the whole hideous episode.

So I’ve not been doing much lately. I have started a new knitting project to teach myself short-row bust darts, which is coming along well – the first actual garment (as opposed to accessories) I’ve knitted since I was about 13! Feels like a big step. I’m pleased with it so far but trying to maintain an experimental approach and accept that things may go wrong (I may have picked the wrong size – it’s hard to tell when you’re as big in front as I am what size you should be making to fit across the bust as well as on the shoulders – or the short-rows may go horribly wrong) and the whole thing may need to be unravelled, but for now it’s a nice gentle knit which is coming along well and is helping to restore some calm to my frazzled brain.

I’ve also been studying for the Life in the UK test which we’re taking next Friday. Gosh it’s dull. And I am absolutely no good at remembering either statistics or random dates or numbers (and why does it even matter that I should know how many constituencies there are??). Anyway, just going to revise and cram and do practice tests now ad nauseum for the next week.

Today I made crumpets. 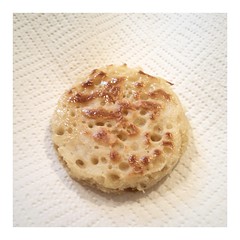 And the great news is that this time they’ve actually come out properly crumpetty. Unlike the last two times when they lacked holes and ended up heavy and a bit blech. These are light and tasty. And the butter pools correctly. They have the Djelibeybi seal of approval. I also made them in the shape of space shuttles and Gromit. 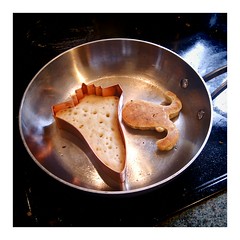