I feel like I’m coming out of a cloud a bit. Back’s still messed up and with the osteopath having told me I can’t go to Scotland for Easter, sounds like it’s still got a little way to go. But I’m gradually starting to get things done again and that feels pretty good. I’ve been getting a lot of listening done. Today a friend on Twitter recommended a couple of albums that were a little outside my usual comfort zone – Mono/Poly ‘Manifestations’ and Grouper’s ‘A I A’ – both of which I very much enjoyed.

I also tweaked and posted a blog post on caitlinrowley.com, The wrong teacher, or just the wrong time?. I’m glad I wrote this post. Not only does it seem to be getting a rapid and enthusiastic response, but I think it’s been important for me to realise just how far I’ve come since my first year studying composition, and to acknowledge that I was at fault at least in some measure. I doubt I could have known that back then – I was timid and ignorant and there was no internet to ask questions of even if I’d thought to do so – but I think it’s good to reconsider the situation and what I could have done to improve it. And maybe it’ll be helpful for other new students who feel they’re not doing so well as they hoped they would.

And finally I finished the iPad case! OK, not 100% – I still need to make a loop to hold the stylus securely, but the case itself is finished and ready to travel. YAY! SO glad to be done with the handsewing. Never again…

This isn’t the finished case (still need to take proper photos of it) but it shows pretty much how it’s ended up. I’m rather pleased with it 🙂 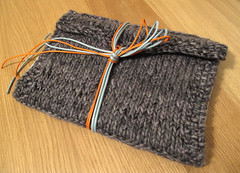