Yes, I know things have been a bit quiet round here, but it’s not like it’s been uneventful. There’s been the back-pain drama, there’s been the dental drama (round 2 of drilling and filling today so back on the painkillers again), there was a birthday, which resulted in lovely presents from lovely people, including: 1 proper real-live microphone, Nigel Slater’s fruit cookbook, a book on libretto-writing, one on poetry-writing, 2 seasons of Chuck. Plus of course the presents I bought myself: the iPad (which you know about and seems to become more useful and awesome with every passing day) and Logic Studio, which arrived on the birthday day but took us a couple of days to install due to my having dropped my laptop several months back, meaning that DVDs go into it but can’t really be relied on to come out again… Still working on how to get the software instruments that come with Logic up and running…

So there’s been a lot of playing about with toys. Mostly the ones I bought myself though as I need to get a cable for the mic, I’m finishing up other books before I start the libretto ones and my back has hurt too much to do much cooking (barring a culinary experiment which resulted in an apple-enhanced caramel cake which went down quite well).

So I’ll just slide over the missed days and focus on today. Obviously, I went to the dentist. He says that this should be the last of the deep drilling (thank heavens). Been pretty uncomfy though, but yay for painkillers! And also yay for spectacularly beautiful summer’s day even though it’s only spring! It was so lovely, I decided to walk home instead of catching the bus (which was taking too long and I was also getting bored), so I walked back through the sunshine and the intermittent smell of jasmine, listening to the birds going twit in the hedges and chatting with a friend in Australia via IM. Rather lovely, actually. 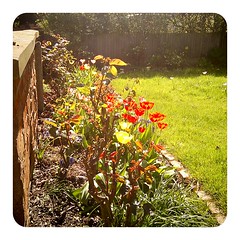 Once home I actually didn’t immediately have a nap, as I’d expected. Instead I did some work on my new piece. It’s been a little stuck lately but I managed to prod it forward a little and flesh out some of the earlier parts too.

Then there was tinkering about with Logic Studio. I’m really enjoying using this. Fascinating to discover that the interface basically hasn’t changed since I was using microLogic at uni – 15 years ago! so it’s mostly familiar, and the bits that are less familiar – the audio-editing side of things, isn’t that dissimilar from Pro Tools, so I seem to be picking things up pretty quickly. And I can’t begin to express how much easier and more comfortable it is to work in it, not needing to be tethered to a hardware box at all times. I don’t have to think twice about opening it up for a small sound-file-trimming job. And I’ve discovered some cool stuff – beat mapping to make a MIDI file sound more like it was played by a human than a robot to start with! I borrowed a book from the TVU library yesterday and started working my way through it this afternoon. Finding out some interesting snippets, but I’m hoping I can get away with just borrowing the book and not having to buy it. Would rather spend my birthday Amazon voucher on the Advanced volume 🙂

And then when the sun was setting, I got all inspired to grab the iPad and try a little bit of drawing. It’s not great, but it was fun to do and an interesting exercise, messing round with silhouettes and trying to get the sunset colours to blend a bit 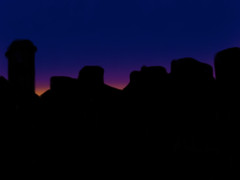