And on it goes. It’s still struggling, but feeling a teeny-weeny bit more solid than it was. It’s reached 2’20” in duration now and the last bit that I’ve been working on since I got back from Portugal seems to be sticking to the other bit, although I suspect it may need a fair bit of tweaking later on. At least it’s progressing though.

Went into town with my mother to do a little shopping/recon for Christmas stuff. Someone in John Lewis told her about a haberdashery shop in a nearby street (Dering Street for those who are curious) so we went along there and WOW! A whole floor of ribbons! Another floor of bias binding, random feathers, zips and assorted fastenings! They have fabric dye too, fabrics (of course) and a vast array of needles. My mother even found the bodkin she’d been looking for (and the person in John Lewis’s haberdashery department didn’t even know what a bodkin was, which is really rather disgraceful). So joy. I’m going to sneak back there soon to buy some secret ribbon for presents – so many to choose from! 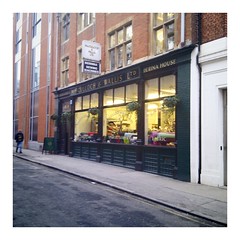