VERY excited today. I’ve been playing round with webfonts when I should have been doing any of the ten billion other things on my list, but it’s been such fun I haven’t wanted to stop. Anyway, the short story is that it’s working! Thanks to the marvellous super-easy generator at Font Squirrel (which also has some great fonts, all of which are free for commercial use) I’ve got these up and running really quickly and now have two different fonts working on the page. 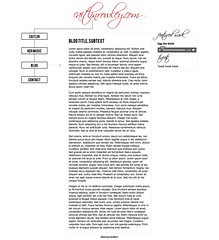 First up is Scriptina, the curly one I’m using for the site name (although I think I’ll leave this as an image so that where the webfonts don’t work at least the site won’t be totally plain), which I’ve used as a webfont for the headings in the right-hand column. I don’t know that this will be used anywhere else much on the site, but I think it gives the homepage a bit more of a sense of occasion. It’s not a very easy font to read though, which is why I’m not using it for the content headings.

The second font I’m using is Bebas, which is on the navigation headings and for the blog post title. I like the feel of this – makes the whole nav feel kind of 50s/60s businessy but I’m having some problems with it with spacing between words. Between characters seems OK, but it’s not really leaving enough of a gap between words for it to be clear where one ends and the next begins. Not sure if there’s a fix for this in CSS. If there isn’t I may go hunting for another font along similar lines.

I’ve also dug up a PHP class which apparently will pull tweets in from a user’s timeline, so I’m hoping to be able to pull the last 3 tweets from my @caitlinrowley account to go on the homepage. I’ve not really used anything like this before, so not sure if I’ll be able to get it working for the launch, but I guess I’ve got to try. It doesn’t look too hard to implement. And I’m about to save down some reading about whether it’s possible to import a WordPress blog post into a normal unconnected PHP page (because the blog is separate, for the time being at least) so I don’t have to manually update the homepage every time I post something.

I’m likely to be a bit quiet here over the next week as I’ll be in Paris and I’m not sure what the wireless situation will be like, or even if I’ll be able to find enough time to get some solid work done on this, but I’ll have the iPad with me and will write posts in the WordPress app, ready to post when I get access to the internet. Crossing fingers I won’t have to spend a whole 7 days without access….