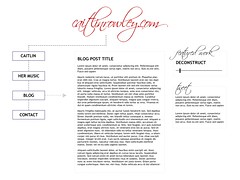 I think I’ve finally come to a conclusion (albeit a temporary one) for the homepage design. I don’t know that it fully meets the objectives I was hoping to meet, but I think it’s a reasonable first step. I wanted the music to be upfront, so I don’t know that the blog post works so well but there’s the featured piece in there and the music-only tweets from @caitlinrowley (a music-related subset of those that go on @minim)  and if I push myself to post more often and more music-related posts, then I guess something will have been achieved. Um… that seems like a lot of ifs.

I’ve spent a chunk of time this evening peering about at other composer’s blogs and they seem to fall into two camps: 1. blog upfront, 2. bio or credo upfront. Well, 2 was never really an option, not as primary focus – I had the credo in there before but it was the first thing to go – I think it’s a useful thing to have in the site because it helps people understand the focus of my music and gives it context (something I’ve had some issues with recently) but it’s probably not the first thing people need to see. If they want to know about my music, then they’ll be clicking into the Music section anyway, so they’ll find it, but it’s probably more important to have the changing content upfront so there’s something fresh for people to (hopefully) come back to. The ‘blog post’ area I see as more of a general new content area – whether that’s an actual blog post, an announcement of a new performance or a new piece added into the catalogue.

So there it is. Not perfect, but it’ll do as a start, so now I guess it’s time to code!

One thought on “Homepage design!”