HUGE leaps forward today. Djeli assembled both the CD and DVD mini-bookcases and the full-size Billy bookcase and I populated them with the relevant media, emptying about 5 boxes in the process – YAY! Unfortunately it seems we’re such media junkies that we actually have overflow from all three media types’ bookcases into the not-so-useful bookcase in the loungeroom. And all this in only 5 years… Must… exercise… self-control. He started trying to assemble the bed too, but discovered that one of the sides has been drilled wrong, which is VERY annoying because it means we need to hire a car again tomorrow night to take the offending part back down to Ikea and wait in the returns queue for hours 🙁 But it will mean that I can hopefully do the remaining errands there while he waits without having to face the horror of buses.

And we ordered the futons to go into the unassembled bedframe so the parents will have something to sleep on.

And we clarified that the poster I’d been thinking of buying (a great one of Battersea power station from Habitat) wouldn’t really go with the new red bookcases, so we saved ourselves £25 on that and will probably get a photo blown up instead.

And I baked. I like to have something to nibble on while I travel and I’m not that fond of commercial treats in general – since going on the deprivation diet a couple of years back I find I can taste the preservatives used in so many commercial biscuits and cakes, which kind of ruins it. BUT I found a fabulous recipe for homemade Oreo cookies and made it up this evening – just the cookies though, because I’ve never been a fan of cream-filled biscuits (although I did fill one pair for Djelibeybi with the leftover Mexican vanilla buttercream from the cake I made for work last week), and WOW. Really brilliant. And SO easy.

Oh, and we washed my teddy bear so he’s ready for my parents’ visit next week and they won’t look at him and go “ewwwww!”

Enough capital letters for one night. Signing off to file biscuits in their tin 🙂 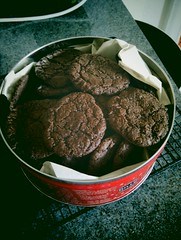