I finally made it! Yes! The Inari Tee Dress that I’ve been procrastinating on for literally weeks! And while you can blame 1990s Caitlin and her “I’m in my 20s, I can wear anything” attitude for the orange-and-green striped fabric, I’m actually loving it. While I was making it and trying (and failing) to match the stripes, I was thinking “well, at least I don’t much like stripes”, but actually I’m thinking I really do, which is a bit of a bummer because, like I say, I totally failed to match my stripes and it wasn’t much fun doing it! 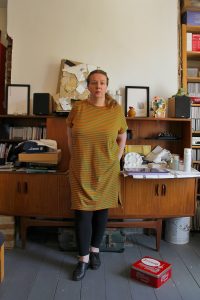 There are still some fit issues – the armscye is waaaay too low on me – I think I need to take about an inch in height out of the upper chest/armholes/top of the sleeve to make it fit better there, and for a jersey I think I probably didn’t need the full 4cm FBA, although it could be right for a woven. Plus I REALLY need to work out how to do a bit of a forward shoulder adjustment on the left shoulder because it does that thing where the whole thing escapes backwards after a bit – probably exacerbated by the longer length at the back too. And finally, I think I’d take maybe an inch off the length overall, just to bring it up definitely above the knee.

So the fit adjustments I DID make were the aforementioned 4cm FBA, as double bust darts, and then needing to move the waist line down and the hip line up so that the proportions stayed right.

And I tried new things! I hadn’t expected to encounter much that was new in such a simple pattern but I have now tried and mostly succeeded in:

Overall I found the instructions pretty clear, although the clear elastic business felt a bit “wing and a prayer” because I haven’t used it before, so I poked about on the internet a bit for some advice. In the end I figured I’d just go for it because I had loads of elastic to spare (I think the minimum I could buy on eBay at the time was about 10 metres) and the first shoulder went perfectly. The second one derailed – sewing machine did something weird and shot off in a strange direction (absolutely not user error… noooo) – but was easily ripped out and the second attempt went just fine. I ended up grading the seam under the cuff turn, although nothing was mentioned in the instructions – it just seemed too bulky to sit well, and I’m glad that I did. My overall feeling was that while many of the patterns I’ve made so far have had their instructions pitched at beginner-level, this one seemed pitched at a slightly higher level of expertise, or at least of capability to look things up. It’s not a hard project to make, but I did feel my hand wasn’t being held all the way through and that perhaps if something seemed to be needed it was just being assumed that I would do it – so “confident beginner” level, perhaps? It was a quite a nice feeling, to be able to recognise that grading was needed and then just doing it and feeling quite confident that I wasn’t ignoring the instructions but have just managed to reach a level of sewing where I actually know some stuff and can work things out.

The fabric is just pillowy-soft (it’s quite a thick pure cotton jersey) and in spite of the stripe-trauma, sewed quite well, although this dress is the site of probably my worst top-stitching ever, and I never quite worked out what the tension ought to be so the underside of all my seams is a wibbly mess. But WHO CARES? It’s insanely comfortable! And far more flattering than I thought it would be, and I’ll definitely be making more of these – it’s like the ideal PhD dress for flopping about reading. Just needs some pockets… 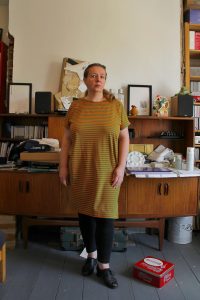