I made a handbag!!! I’ve been thinking about doing this for ages as my little corduroy bag has been slowly disintegrating for some time, and the Noodlehead Runaround Bag pattern seemed to be very close to a late lamented favourite bag that I bought in Australia many years ago.

Cue much dithering as I had fabric for the outside but nothing that matched for a lining and I wasn’t sure what I wanted and I didn’t have enough interfacing and I didn’t have much money to spare for this and blah blah blah. Then I discovered The Refashioners challenge, which this year has jeans as its base material. And I thought OOH and lo, an idea was born.

This bag has been made almost entirely from stuff I had lying around. The outside is an old pair of jeans, the inside is a remnant left over from my first Lou Box Top, the pockets and tags inside were taken from the jeans, the button was from my grandmother’s button collection (proper vintage!!) and the key tab was made out of an old lanyard from a former job. The only things I bought for this were interfacing for the outer layer, bias binding and many miles of thread.

And I’m super-pleased with how it’s turned out. If I could choose just one word to describe it, that word would be ‘capacious’. It looks so demure and reasonable, but good golly this little beastie fits a lot in! I took it into London today for its test drive trip. Because I’m paranoid about weather and boredom, I already had a paperback book, cardigan, a bottle of water and a rolled-up tote bag in there along with the more basic wallet, keys, etc. And then I bought two smallish-format hardcover books and they just plopped right in there and the button still did up nice and easily. And then just before I got on the train I also fitted in a can of drink and a small packet of dried mango. At this point the button didn’t really do up easily. I could have made it do up but was reluctant to put it under strain first time out and for no real reason. So yep. Pretty darned capacious. I don’t know that I’d want to put that much in there regularly, but it does mean that it’s going to be very useful. It’s big enough to take an iPad even! 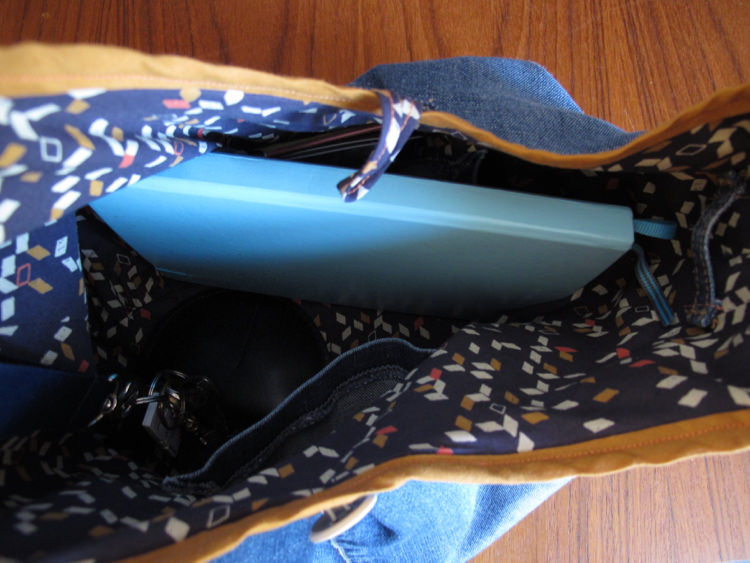 For reference, the notebook in these shots is an A5 Leuchtturm book, so you can see the sort of dimensions of the inside.

The pattern itself is quite simple in construction and the instructions were quite clear (although somehow I got in a muddle and topstitched the pleats which clearly wasn’t the way it should be) but it did take me 11 days, much of which was procrastination time. I think a more experienced sewer would be able to put this together in an afternoon. For me, though, this was a project of firsts:

I used the leg panels as fabric, cutting down the outer seam and using the inner seam as a detail down the middle of each side of the bag and running across the centre of the bag bottom. I topstitched down the other side of the seam for balance. The inner seam curved a bit and the fabric overall wasn’t quite wide enough in places so the edges of the pattern piece didn’t quite fit so I compromised a bit there, on the grounds that, eh, it’s a bag not a fitted thing. Because of the seam curve the top of the opening was a bit longer than the pattern specified so I took up the extra in the pleats.

I unpicked the back pockets to use as internal slip pockets and two belt riders to serve as loops inside the bag too. The pockets are OK but for some reason they seem to tip forward. The lining is fine, and I laid them out flat on the lining when I sewed them down so I’m not sure what’s causing this, but I don’t think it’s a huge problem. The loops are great through. One of them has the lanyard/key thingy attached and that’s working well. I wasn’t sure what to do with the other one, but it seems to be great for keeping sunglasses under control 🙂

I had originally planned to make my own bias binding, but I wussed out on the grounds that 1) I just couldn’t face making more bias binding having recently completed 2 Sorbettos and facing number 3 in the next couple of weeks 2) I wasn’t at all sure that I’d have enough fabric for the full length as I was working with a small remnant 3) the lining fabric is actually a very lightweight cotton batiste rather than the quilting cotton the pattern specifies – I actually ended up interfacing all the body lining pieces to make it a bit sturdier – and I was concerned that it might wear through quite fast on the opening of a bag. And then my local sewing shop got in a new batch of BB and they had this tan 20mm one, which was pretty much a perfect match for the mustardy tan colour in the lining and for I caved.

For the most part I just followed the pattern, but there were a few freestyle elements where I kind of just winged it, which was new territory for me. Obviously the pockets and loops were entirely made up as I went along. Not that they were hard and I was rather indecisive about placement, but I got there in the end. The button and loop also weren’t in the pattern but having done a button and loop for the Lou Box Tops, I at least knew that the loop should be cut on the bias. I decided to sew a patch of denim over the loop ends to help stabilise it and I think that’s come out quite well, especially considering that I wasn’t at all sure my little basic sewing machine would be able to deal with the 5 layers of denim + interfacing that this entailed. But it did (with a lot of hand-wheeling) and the patch neatly covers my not-so-neat accidental topstitching down the pleats, so hurrah! In the following photo you can also see where I did the triple-stitch topstitching around the bias binding. 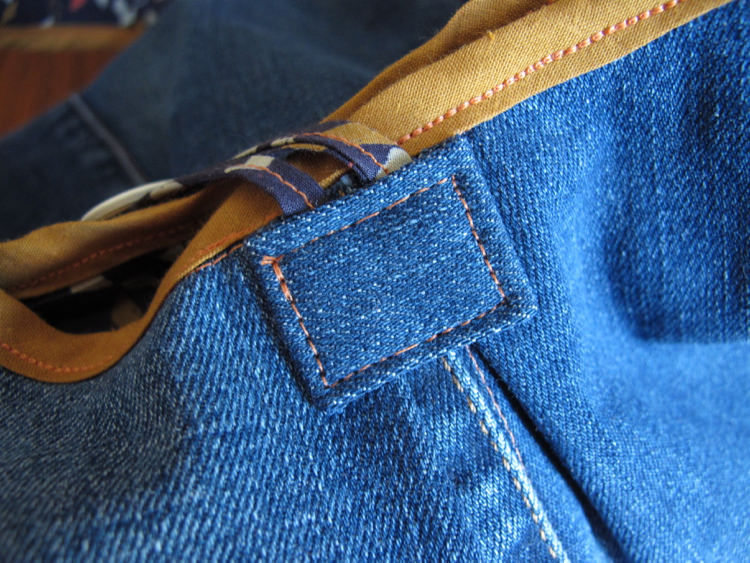 Materials: old jeans for outer fabric, pockets and inner loops, leftover cotton batiste from this top, repurposed lanyard, vintage button from own collection. The only new materials were iron-on interfacing, thread and bias binding so the whole project cost me about £6 total.

Enough of my babble though. Suffice it to say that I’m pleased enough with this bag to be contemplating making another one… although maybe not for a little while – other projects await!