And today is the last day of my Creative Pact listening project. That kind of snuck up on me a bit, but I’ve got some good work done over the past few days. More Birtwistle, finally listened to the Saariaho (and liked it), plus some other things that had got stuck on my list. 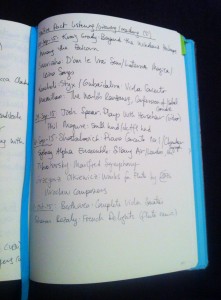 So I guess it’s time for a summing-up. Overall, it’s been a useful exercise to focus just on listening. I felt a bit lame with the lack of concentration I put into some of that listening, but I think it helped even when I was only devoting half a brain to it. I think the regular turnover of my phone’s music library was a very useful thing and I’m going to try to keep that up, as well as the habit of listening to something over breakfast every day.

I did feel that much of the stuff I listened to didn’t really stretch me. Either because it was fairly (or very) conservative (such as this morning’s Beethoven Violin Sonatas) or because I didn’t connect with it (Birtwistle. Still don’t get him. Need to try his Moth Requiem, I think.). I think I want to directly tackle that and might start taking actual notes of composers people mention who I haven’t heard of and seek them out online. Spotify playlists would be useful – and if you have one you think I might like, please let me know! I also want to get back to doing some score-reading while listening, which I haven’t done in a while and which I did none of this month.

But there’ve been some good discoveries in there too, especially of things I’d forgotten about or had just not got around to before. Including, in no particular order:

So in the final summing up, that was 63 albums (or works, in the case of live performances) listened to. I missed 3 days’ listening, but in exchange for those 3 days can report 1 arrangement completed (and performed), I’m now back at work on Manifesto, which has been fallow pretty much ever since last year’s CP – and am hopeful of completing it this week – plus I’ve developed strong ideas for two new pieces.

I’m still of two minds as to whether I now want to try to embark on the original notated-music project tomorrow as an October CP. Quite tired, and need to focus on getting ready to go to Australia – but I also have projects which will involve notation which I want to get at least started before November, so maybe it’s a good discipline to do that. Will sleep on it and report back (or not) on the morrow…