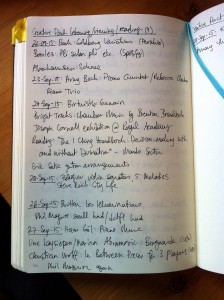 So this is early in the day for a CP post, I know, and this is mostly about yesterday, but I figure I’ve been so slack with the whole post-every-day (but not with the document-every-day – what a good girl I am!) that I prob won’t be posting this afternoon anyway, so I might as well talk about this stuff that’s risen to the top of my brain this morning.</babble>

I did the delete-and-refil on my phone yesterday again. I think this is the third time I’ve done it this month, which is a record for me, but I’m finding it a useful exercise. Because I’m trying not to listen to the same thing over and over again like I usually do, each time I refill, I go through and delete what I’ve listened to that week, plus anything that doesn’t appeal to me right now and then have to hunt about on the server for stuff I haven’t listened to at all over the past month. Consequently, the further I get into the month, the further my portable music library gets from my comfort zone, which can only be A Good Thing.

As you can see from the journal page, I’ve managed a couple of things from this week’s challenge in the past few days – a great wodge of Boulez (it was kind of an ‘all his biggest works’ album on Spotify & I couldn’t be bothered to list all the titles) and some Birtwistle at least. No, yet again I didn’t get to the Saariaho. Will do that this week. Maybe after I’ve finished the gorgeous Kraig Grady I’m listening to right now.

But I’m realising, as I get further into this month of listening, just how mind-bendingly conservative most of my music library is. True, it’s the accumulation of about 3 decades of record-collecting, and for 99.4% of that time my taste didn’t really stretched much beyond the tuneful (a few random acquisitions notwithstanding), but I’m finding I’m turning to Spotify a bit more and yesterday went for a bit of an amble through Ubuweb Sound because I was feeling a dearth of experimental music in my playlists.

Clearly, the limitations of my own library are something to work against and I still need to sort out how to do this so that I actually do DO it. I mean, it’s not hard to find stuff on Spotify – but you kind of need to know what you’re looking for in the first place because searching for ‘experimental music’, say, seems to just lead to a slew of dance tracks. Will investigate options.

So that’s been going quite well, although I was finding the ‘listen every day’ thing actually pretty exhausting. I love my silence, and it’s not unusual for me to go days without listening to anything, so it’s been real work to make myself remember that I’m doing this thing and that sometimes I need to just listen to stuff even if I don’t feel like it. But I think it’s paying off. That whole ’21 days makes a habit’ thing is starting to kick in, and my over-breakfast listening is now become automatic (although as I’m pre-coffee, it’s not usually a great time for pushing the boundaries) although listening during the day still requires an effort.

I woke up feeling a bit lost today, though, and realised that today is the first day in a very, VERY long time where I haven’t got a show to promote. ‘Closet Music’ closed yesterday and while I’ve got some stuff coming up, there’s nothing with a concrete date, and no real deadlines for work at the moment. That’s making me feel rather adrift on a vast sea of admin, so today I need to do something about that and make something. I don’t know what yet. But something.