I did say in my last post that things had been a bit crazy… and they just got more so. I’ve been attempting to keep up with my listening, even when I haven’t been able to post, but between Djelibeybi being incredibly ill (he who never catches anything… he’s on the mend now though, I’m happy to report), me getting sick and both of us staggering off to Rome for my birthday trip to the opera, then returning home to rehearsals culminating in a performance on Thursday, I’ve got a little behind on my CP reporting.

There’s a bit of a gap between 12 Sept and 16 Sept (on the next page to be posted) because over these few days I was actually well enough to do some work, so was frantically arranging ‘Entropy Stones’ for guitar, then the 15th & 16th were marathon rehearsals for Bastard Assignments ‘Fresh & Clean’. So most of the ‘listening’ I did on those days was to my own work, but I was also tinkering with dots, so that was at least a nod to the original plan for this project.

I found doing the arrangement very helpful for getting back into the Real Notes mindset. Not only was I reviewing what had been written, but getting my head around the guitar (always difficult), and then to be performing the piece myself felt like a bit of a reconnection with this side of my practice and a good warm-up for hopefully actually writing some new notes in the next few weeks.

Looking back at this list though, I feel a certain connection between the things I’ve been listening to. Not necessarily a sameness, but most of these things could be viewed as being sort of familiarly related in feel. Does that make sense? So this coming week I want to try to push myself a bit to work more at listening to things that are a bit different. Today, for example, I’ve made myself listen to Turnage’s Your Rockaby, which I’ve owned for goodness knows how long – I bought it on sale in Australia at some point, so it’s been on the shelf for at least 10 years and I never really listened to it properly. 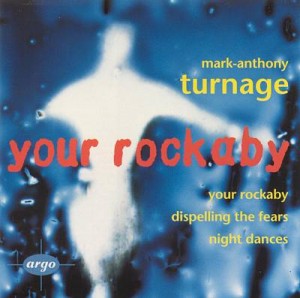 I still don’t know that Turnage is my cup of tea, but I’m understanding the music much better than I ever did before. Might make a point of coming back to this one a few times and see if I can really grasp it by the end of next week. Other composers whose work I think ought to be on my list for the next week: Birtwistle, Saariaho, Grisey, Ferneyhough. Recommendations accepted!