The performance is really starting to take shape now and I seem to be carving out a role for myself but it really is carving – definitely not something I’ve just stepped into, but I’m glad I decided to not bring my flute. It might have been easier if I had, but I think this experience is actually more valuable for me as a composer, even if it’s a bit uncomfortable at times.

This morning we finished making the camera-instruments, assembling our timers, the flash component (made safe by John) and the switch and pot control into the camera body. Fiddly work, but very satisfying and the cameras closed up perfectly once everything was in place and wires wiggled so as to be as low-lying as possible. 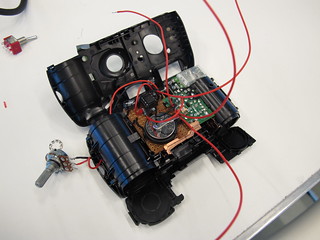 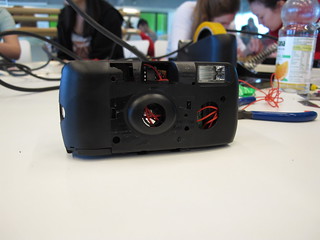 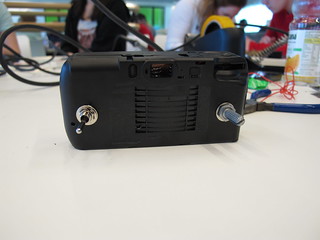 The afternoon was spent rehearsing the performance and I spent quite a bit of time working with Marie, who was organising the dancers and providing them with feedback due to being poorly and unable to dance herself. This was very satisfying, between discussing things with musicians, suggesting and discussing ideas with Marie, working out cues for musicians and dancers alike. It was a very productive afternoon, one of the best we’ve had, I think.

While the dancers were rehearsing Hug after this, I co-opted the musicians to try out some ideas I’d been playing with for the sudophones. Well, that was a bit of a bust, alas. And not helped by everyone being tired! So that idea’s gone in the bin, but we’re considering performing Stealth in the concert instead. Not entirely sure how that would work, but it might. At any rate, it was useful to work on the failed piece and while I’d hoped for input from the performers to try to make more of it, it still helped in that I think I’m beginning to see how working with unusual instruments such as these, for non-specialist performers, requires a different way of thinking from how I usually approach writi music. My ideas were too precise to work, I think, even though I’d tried to take into account the temperamental nature of the instruments and that they don’t all respond the same way – it seems to me that writing for stuff like this, you actually need to compose gestures rather than sounds. Compose the gesture and the sound will follow, but if you try to duplicate particular sounds, even allowing for variation, it all comes apart.

The main piece is coming in at about 17 minutes and I think John’s and my estimates were about right – it really couldn’t be any shorter – it needs that length to work through all the material, both audio and visual. 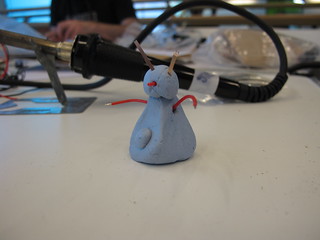