Feeling kind of low today. I suddenly realised I’ve done basically no listening all holiday and I think that’s why I’m having so much trouble finishing Fear of Falling – I’m cannibalising my own brain. I need fresh ideas to enliven mine and push the piece home. Ansel Adams is also struggling. I’ve got a sort of a plan, but no direction. I really really like the opening but I don’t know what I think of the second bit. Sometimes I like it, sometimes I hate it. To a certain extent I feel I should push on with what I’ve got and see if I can make it work, if only because of the limited time available.

I’m also starting to feel a little burnt out, which is NOT GOOD as I’m about to dive into a new term, so I’ve been trying to be a bit gentle with myself today. I suspect this is a combination of frustration over the composing not going well, hyper-awareness that I haven’t finished everything I wanted to do these holidays (haven’t even started some of them!) and just general worry. Not to mention lingering last vestiges of cold and being generally coldy-tired all the time for the past week. I did a pomodoro’s worth of work on Fear of Falling and tidied some stuff up but didn’t really make any progress, and half a pomodoro on Ansel Adams (now nearly to 3’50”). I almost never only do a partial pomodoro, but I was feeling just mentally exhausted and it seemed better to stop, blog and head bedwards than to push myself too much.

I did do some listening – Schnittke’s Hymns and a Charlie Mingus album, both from the Orchestration – Medium listening list. I’m beginning to think that I lack the gene for jazz. It’s not that I don’t like it, it’s just that mostly, unless it’s super-straightforward trad, I don’t really GET it. I know at least two people on Twitter who, should they read this, will be sitting up straight and shouting “WHAT???” at their computers about now – please don’t unfriend me! I’m trying to learn! The first few tracks of the Mingus were just way over my head but the rest of the album I quite enjoyed, even though mostly I didn’t have a clue what was going on. I get quite uncomfortable when I can’t feel the structure of a piece, and it was like that for me, in spite of appreciating the performers’ skill and the permutations that were happening. It was an interesting experience though.

I did some knitting while I listened too, because I didn’t want to get too het up about not falling asleep, or too manic about noting down every little thing I did or didn’t like. I just wanted to get some different sounds into my head (also with the aim of Fear of Falling not stopping me sleeping tonight like it did last night!)

I think the burnout-feeling is best tackled by focusing on what I *have* achieved and on how the other bits will fit in once term starts up again, so:

So there it is, some good, some panic, some stuff that can safely be deferred a little. I should probably add that I also safely negotiated Christmas, painted the bedroom floor so it feels like a real room, started fixing up my finances which had got way out of control and so on. Didn’t succeed in finishing the two client projects I’ve had on the go and really really need to get done, but it’s been difficult to find time, brainspace and getting these together at a moment when the computer isn’t chucking a wobbly and making itself unusable has proven to be very difficult. Should try to tackle these tomorrow so they don’t lurk too much into the new term.

In cheerier news, Djelibeybi brought me home a present yesterday! We’ve been hunting high and low for my lovely Derwent Coloursoft pencils, but alas they seem to have vanished in an odd box somewhere and it’s been really frustrating me. He called me from Cass Art yesterday to say they had pencils on sale, but they didn’t have Coloursofts (I’d been thinking of getting just a set of 12 to tide me over). He said they had Inktense ones and I made a drooling noise but then pulled myself together and said that I’ve been trying to justify those for the past couple of years and continually failing, so no – and then he brought them home for me as a present! What a lovely lad! So I now have a gorgeous set which contains 22 Inktense pencils plus some Inktense colour blocks (basically, they’re like the lead part of the pencil but in a pastelly block) and bits and pieces like pencil sharpener, eraser, holders for the colour blocks and a sandpaper block for reshaping points. What joy! And the colours really are fabulous. I’ve been brightening up my mind-maps a bit with them 🙂 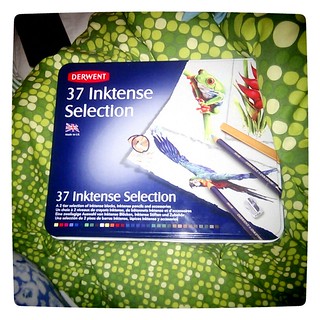 One thought on “Advent Calendar: 36”