I figure I might as well blog our renovation efforts here as it’s eating up every ounce of creative, mental and physical energy I have, and maybe somebody might be interested. At any rate, it’s healthy to have a little rant every now and then and it’s entirely up to you whether to read said rant or not. This post starts with a bit of a wail but ends with cheerier bits.

Yes, at last the house is ours. Only took 6 months, but we’ve now exchanged (last Thursday) and are now beavering away on the renovation, trying to get some part of it at least liveable-in in 2 months’ time. We spent all of yesterday out at the house and, frankly, I’m a little scared by our timeline, and all the more so as Djelibeybi may be starting a new job next week which would see him spending 4 hours a day commuting (which will be less once we’re moved in, at least, but first we have to get to that point!).

Now that some of the flooring has been taken up and the bathroom ripped out (Djeli did that yesterday), the full extent of the work is visible, and a fine layer of terror has settled over me. Far from what we first talked about and my conditions being that the bathroom would be finished when we moved in, and no building work needing to be done after I start studying, it feels like neither of these are going to happen. I’ve expected for a couple of months now – as the bank’s delays piled up our London rent and ate into our renovation budget (£8000 they’ve cost us in delays, based on when we had [reasonably] expected to move)  – that we wouldn’t have a kitchen when we moved in. Now it seems that the bathroom may be only half-done, or half-temporarily done, and now that Djeli’s ripped out the fittings that were there, we can really see that our bathroom is indeed only about 2/3 the length of the petite bathroom our neighbours have in the same spot, which sets another cat among the pigeons: do we do the bathroom now in the expectation of ripping it all out in a year or two and rebuilding that room to make a more intelligent use of the space and extending it? Or do we accept that it’s just going to be an insanely small bathroom (well, shower-room – seeing the space now, there’s no way in the world a bathtub would fit in there) for a 5-bedroom house and focus on getting the changes made (adjusting the staircase, eating into the top two rooms) to fit a more decently sized bathroom at the top of the house?

Plus on top of that, it’s so small that the lovely handbasin we found at Ikea – 80cm wide – is most likely too big for the wall space we have and we might have to get the 60cm version. And the Ikea website – unlike what seemed to be implied in-store – only has that basin as part of a freestanding washstand configuration, not as a separate component that we could build cabinetry around.

And the nice Twyford Rimfree loo we wanted isn’t available in a build-in version till October, which means we either need to get it freestanding or start the hunt for a loo all over again.

And we still haven’t settled on a colour scheme, although seeing how very, very, very tiny the room is now, I’m inclined to go for white all over, with maybe a pale contrast (wood??) for the cabinets and glass for any additional shelves we decide on. Must install the software Djeli bought which allows you to create 3D drawings of rooms & apply different finishes, etc.

So the whole bathroom issue is a mess but nevertheless needs to be sorted out – and installed and working in about 6 weeks so that we can move in.

For the rest of the house, while structurally sound, it is FILTHY, with a capital FILTH. I spent most of yesterday sweeping/vacuuming, which helped, but was hindered by there still being stuff everywhere (old carpet, carpet underlay, crappy furniture left behind, bits of wallpaper that have peeled off the walls) because we haven’t had time yet to get a skip in. SO glad we bought a steam-cleaning-wallpaper-removing kit thingy the other day – sterilised cleaning FTW.

In happier news, the garden is coming along well – I spent an entire afternoon the other day doing battle with the stinging-nettle-triffid and went back to work on it yesterday for a couple of hours and basically nearly a quarter of the garden has now been cleared – on the surface, anyway – I still need to get in there with a hefty fork and/or mattock to remove roots, but it’s accessible at least now and many roots have been pulled up in the course of the clearing, so all in all it’s a huge improvement. Compare: 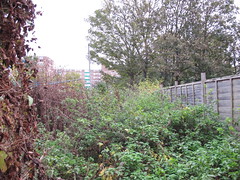 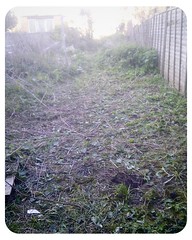 Interesting discoveries along the way have included: a massive, well-preserved ladder, a single man’s shoe, 7 tennis balls in very good condition and a 25kg rock salt bag, which rather freaked me out until I realised it had been entirely engulfed by nettles and therefore the ground was unlikely to be salted. I suspect it doesn’t have any salt in it now, but it definitely has something in it so we are exercising caution and waiting to move it until we have a nice sturdy shovel and a wheelbarrow (actually, there’s a rusting wheelbarrow further along the garden. And a shopping trolley. Might excavate down that way to extract the wheelbarrow and see if it’s usable). Oh! And I found a healthy borage plant! So far the only thing in the garden that’s actually worth keeping. I am taking it a pot and some fresh potting mix on Wednesday when I shall dig it up to make sure it doesn’t get destroyed along with the weeds.

So there’s good and bad, which is to be expected. Our plumber came up with a fantastic idea (which we probably should have thought of) for the no-kitchen period: get a barbecue! I think we may go with this, which would be awesome – I’ve been wanting to have a go at smoking some beetroot ever since I got Jamie At Home a few years back wherein he has a recipe for steak with smoked beets. OMG that would be AWESOME! And of course as we’ll be moving in in June, it’s the perfect time for barbecues too 🙂

Our next big idea is to attempt to organise a house party – see if any of our friends (we love you all! we need your help! please come!) are willing to act as builder’s labourers for a day to clear the dross out of the house & into the skip, scrub floorboards, remove wallpaper, tackle the triffid and other tedious tasks in exchange for baked goods, immense gratitude and a warm glow. Just need to set a date and put out the call…