Yup, having settled on “Lucky Dip” as a name, and not having heard back from the owners of the Flickr image I wanted to use, I decided to draw my own, using the photo as a rough model. I drew the blackboard outline, a little bit of shadow on the back legs, the fringed border and the board itself in charcoal on half a sheet of A2 paper (I’ve been caught out by A2 paper before – far too big to fit on the scanner!), then pulled the scanned image (after cleaning up in Photoshop) over to the iPad to add colour and text. The final layout I did in Photoshop, after sending the coloured image back to the computer again.

I may tweak it later but as a first draft, I’m pretty pleased and I’ve put it up as the album image on SoundCloud. 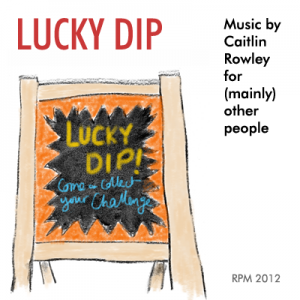 It’s been a very long time since I’ve done any drawing, and longer still since I did any with actual paper rather than just the iPad, so this was a really fun project. The whole album’s feeling really real too now – there’s only one more track to come in, with two possible replacement tracks. Guess I should think about what order I want them all to go in too. At the moment they’re just in the order the recordings came in, but I’m thinking that shuffling them around might be more effective.

Today I received Kim Hickey’s recording of her piece, Flit, for flute. I am just amazed at all the great performances I’ve been getting for these pieces – so little time to prepare them and yet everyone’s done a really good job of capturing their piece and getting it recorded. I haven’t had to put on a stern face & tell anybody to try harder, nothing’s turned up sounding like it was recorded underwater in a bathtub in 1902. A couple of pieces have needed a touch of reverb to really bring out the tone of the instrument, and Kim’s recording needed a tiny bit of hiss reduced, but that’s been it, which has been both wondrous and a great relief because I’m no skilled recording engineer.

But I digress, here’s Kim’s piece:

I also posted an update of Alun’s tango – the original for some reason came through very very soft, so he’s adjusted his recording slightly and sent me a slightly louder one, which really makes a difference. It’s still fairly quiet, but there’s a bunch of tiny details in there which eluded me in the previous version.

Sam also sent me copies of some of his rejected takes for I Want It To Kill People. I found it absolutely fascinating to listen to the various approaches. They’re all good, but somehow the final take he settled on just interacts with the tape part a little more effectively than the other versions of the graphic score. What was particularly interesting was to hear the take on which he improvised, without the graphic score – that’s a really interesting piece. It’s not the piece that I Want It To Kill People became, but something else. It’s more enmeshed in the tape part – he’s taken some of the gritty sounds and used them as inspiration for the guitar part – whereas my vision of the piece was that the guitar was this soft and lovely thing with depths of aggression, Sam’s version is more like watching the soft and lovely guitar be corrupted by the aggressive tape part. Really fascinating. He’s also sent me just the guitar recording from the final version and I really think I will have a go at tweaking the tape part – there’s a blob of notes about a third of the way into the piece that really feel like a stumbling block, so I’m going to see if I can make them less intrusive.

So that’s RPM for today. No, the harp piece hasn’t happened yet. Yes, I’m hoping to get to it tomorrow. Today was full of client work and physiotherapist and – at the end – half of a wonderful concert by Joby Burgess at Wigmore Hall and a lovely chat with @stevegisby and his girlfriend. I managed to get there for the end of it (thank you, Central Line – not!) and got to hear Gabriel Prokofiev’s ‘Fanta’ from Import/Export and Steve Reich’s Electric Counterpoint, movements II and III played on a MIDI xylophone, which was interesting, although I think I prefer the electric guitar version I have on CD in Sydney. Very much enjoyed the Prokofiev piece though – inventive, fun and very much a serious piece of music, in spite of the amusement factor of being played on glass bottles of Fanta. I did wonder, though, how long it’ll still be able to be played for – what happens when they no longer manufacture glass bottles of drink??? I guess it’s just a piece that embraces its own ephemerality.

I seem to have come out of the day with a Proper Job too. And the best sort of proper job – mobile web dev, working from home, for about a week, for a client who used to be a colleague when I was at LBi and who has now set up her own UX business for financial services companies. Really looking forward to this one.

One day to go. One recording to come in. This time tomorrow night, RPM 2012 will be complete!