A good friend gave me a talking-to on Friday about how I’m always trying to do too much. And he’s right. I woke up absolutely hating everything today. The house is too neutral, I was disappointed with the work the landlord had done in the bathroom – he seems to do everything on the cheap and often without consideration for how it looks or functions, so in changing the shower setup so we can shower without crouching, he removed the good quality, perfectly functional and convenient mixer tap and replaced it with two cheap taps, so we no longer have the convenience of staggering, half-asleep into the bathroom & just lifting the mixer tap, knowing it’s on the right temperature – we’re back to faffing around with trying to get the temperature right before we can step in. And they’re the sort of taps where the colour panels on top start unwinding themselves the instant you start to use them. And the plumber put them on the wrong way round so hot says cold and vice versa. Small things, but enough to set off an attack of the glums.

So I spent a fair chunk of the morning thinking about how I can make the house brighter and better and feel more like home than rental accommodation. And I think I’ve at least settled on a palette of red, orange and teal. It’s kind of hard to make stuff go with the oatmealy walls because they’re neutral but not truly neutral – in the kitchen, for example, depending on the time of day and available light, like right now (overcast, indoor lighting on) one wall looks pale yellow, the other looks almost apricot. But it’s the same colour. So I think strong colours are really the only way to tackle it. Anything else will be wishy washy.

On the plus side, this fit of frustration made me get up and do some tidying and cleaning and to write some lists of all the things we need to buy or get done before my parents arrive in about 3 weeks’ time. I put on the CD of Tripod vs the Dragon which we bought at the show in Edinburgh (awesome!) and sorted a bunch of stuff out.

Djelibeybi had to go to Andover in the evening so I caught the train with him as far as Shepherd’s Bush, bought some stuff for dinner and wandered round the shops & finally caved on the beautiful little red & orange Le Creuset Poterie ramekins I’ve been eyeing off for at least 2 years. They were a little more expensive than I’d seen them elsewhere, but I was so desperate for colour that I just thought ‘sod it’ and took them to the counter… Where I discovered they were 20% off! 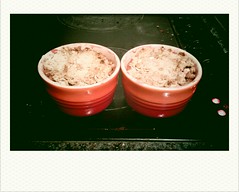 And then I decided to take the evening off too – house to myself, Wiener schnitzel for my tea, I made apple and raspberry crumble in the ramekins and watched a whole DVD of Season 1 of Chuck. Happiness!